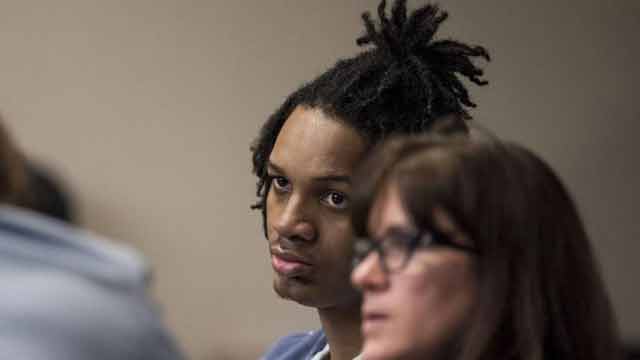 A man charged with murder for the deadly shooting of a Shawnee, Kansas, gun shop owner during a botched robbery last year told a Johnson County judge on Tuesday that he was trying to surrender when he shot the shop owner in self-defense, a claim that the judge promptly threw out.

De’Anthony Wiley, 21, is one of four men who attempted to rob the She’s a Pistol gun shop in January 2015. He and three accomplices – Nicquan Midgyett, 21; Hakeem Malik, 20, and Londro Patterson, 21 – were all charged with murder. If convicted, they could face 25 years to life in prison.

During the January 2015 robbery attempt, shop owner Jon Bieker was in a back room, while his wife, Becky, worked the front counter. Armed with handguns, two of the suspects immediately confronted Becky and demanded money. As they terrorized Becky, a third suspect jumped over the counter and punched her in the face with such force that her nose was broken and she was left unconscious.

Becky Bieker, left, and her husband Jon, who was killed during the robbery attempt.

Moments later, Jon emerged from the back room wielding a gun and shots were exchanged between him and the suspects. Jon struck two of the suspects and they, along with another suspect, fled from the store.

Before Wiley could get away, he was also struck by gunfire. The bullet lodged in Wiley’s spine, dropping him to the ground and leaving him paralyzed. As he lay on the floor just inside the door, Jon continued to come at him, still firing, but Wiley fired back, fatally striking Jon. The shop’s surveillance cameras recorded the entire 30-second exchange.

Becky, who did not regain consciousness until after the firing stopped, testified that she awakened to Wiley reaching for a gun on the ground. She said she had a handgun and, as she dialed 911, warned Wiley she would shoot him if he moved. Wiley tried to call her bluff and continued to reach for the gun, at such time Becky opened fire.

Wiley’s attorney, Lindsey Erickson, said her client was lying on the floor paralyzed and otherwise unable to defend himself when he shot Jon in self-defense. “He could lay there and be executed or defend himself,” Erikson said, The Kansas City Star reported.

But neither prosecutors nor the judge bought the claim. Prosecutors argued there was no evidence Wiley ever attempted to surrender, noting he continually fired his gun, even after he was on the ground. The judge also interjected that Wiley only stopped firing after his gun was empty.

Kansas state law does not allow immunity for those who instigate the use of force or are fleeing after the commission of a felony.

Following a day and a half of testimony, which included video evidence, District Judge Timothy McCarthy threw out Wiley’s self-defense claim.