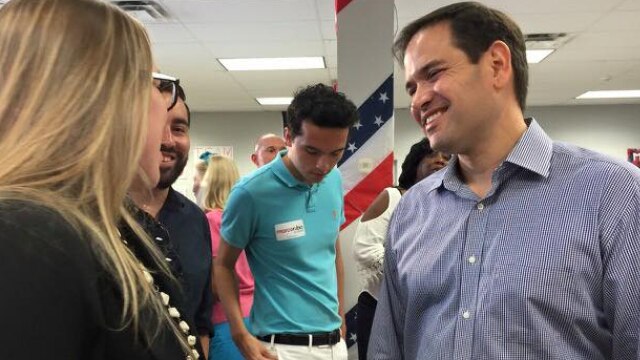 Former Presidential candidate U.S. Sen. Marco Rubio on Thursday highlighted a bill aimed at keeping guns away from suspected terrorists as he fights a tough reelection bid to keep his Senate seat.

The legislation, which fails to mention No Fly Lists, would require the Federal Bureau of Investigation’s be notified of any request to transfer a firearm to an individual who was the subject of a federal terrorism investigation within the last 10 years.

“This bill would achieve everyone’s goal of making it harder for suspected terrorists to buy guns, and do so without violating the due process and Second Amendment rights of innocent, law-abiding Americans,” Rubio said in a statement. He described the measure, the Terror Intelligence Improvement Act, as building on and improving “the best ideas that have been proposed,” so bipartisan support is more likely.

Under the proposal, the FBI would house federal intelligence investigations; require the FBI Director’s office and the Joint Terrorism Task Force be notified if a federal terror suspect attempts to buy a firearm through a licensed dealer; and allow the U.S. Attorney General to delay the transfer for three days while seeking a court order to stop it. Should the court deny the petition, the government would assume the costs and attorney fees.

With the 114th Congress only months away from dissolving and progress on Rubio’s bill unlikely this session, his opponent for re-election, current U.S. Rep. Patrick Murphy (D) blasted the proposal as “callously opportunistic” and a failure at preventing gun violence.

“Floridians won’t be fooled by Marco Rubio’s transparent attempt to paper over his relentless opposition to legislation that prevents gun violence,” said Murphy in a statement. “After the tragedy in Orlando, Rubio used the deaths of 49 innocent Floridians to run for re-election while voting against every bill that would have helped keep our families safe. He even voted against a bipartisan measure, introduced by a Republican, to prevent people on the No Fly List from purchasing guns.”

Notably, Murphy in June proposed a bill similar to Rubio’s in the House. That proposal would require that anyone who has been under a terror investigation have their information added to the National Instant Criminal Background Check System. While not made a prohibited firearms possessor outright, the NICS system would automatically notify the FBI if a background check is processed through the system for such a flagged individual.

Rubio’s terror bill comes at the same time that Murphy voted against H.R. 5351, which bans the transfer or release of detainees from Guantanamo Bay until either the end of this year or the enactment of the National Defense Authorization Act for fiscal year 2017, a facet the Senator was quick to point out on social media, tweeting, “Today Patrick Murphy voted to fund release of terrorists at Guantánamo Bay, despite clear evidence they are rejoining militant groups.”

The latest RealClear Politics polling data has Rubio up by six points over Murphy with the election with less than two months until the election.