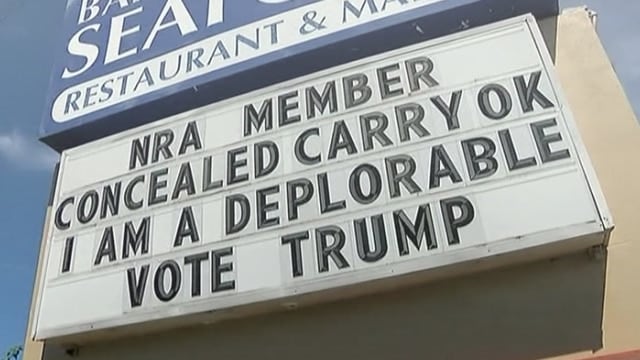 A Florida seafood joint and a California six-time Olympic medal winner typically have little in common. Except when you talk guns, Trump, and “Deplorables.”

Barnacle Bill’s Seafood Restaurant and Market in Sarasota, Florida is catching heat on social media since they changed their sign up front to read, “NRA Member, Concealed Carry OK, I Am A Deplorable, Vote Trump.”

According to WWSB, the local ABC affiliate, the sign has drawn hundreds of comments to the business’s Facebook page, though the response is mixed with some announcing they will never break bread there again, while others proclaiming they will become new customers.

Restaurant owner William Davis says the deplorables comment is drawn from a speech over the weekend in which Hillary Clinton classified half of Trump’s supporters as a “basket of deplorables” though she later walked that comment back. Davis says he plans on leaving the message up until the election is over.

“If you’re going to make a statement, you got to go all the way,” says Davis.

Meanwhile, across the country on the West Coast,  trap and skeet shooter Kim Rhode, the first Olympian to medal at six consecutive summer games, posted a photo to twitter this week holding a “Gun Owners for Trump” t-shirt while at the range.

She also keyed into gun rights and the deplorables comment, saying, “Wife, mother, olympian, proud supporter of the 2nd Amendment & how DARE anybody put me in a ‘basket of deplorables’!”

Wife, mother, olympian, proud supporter of the 2nd Amendment & how DARE anybody put me in a "basket of deplorables"! pic.twitter.com/n6t50ID1d6