Shots fired: NRA doubles down on attack against Kander 2A record 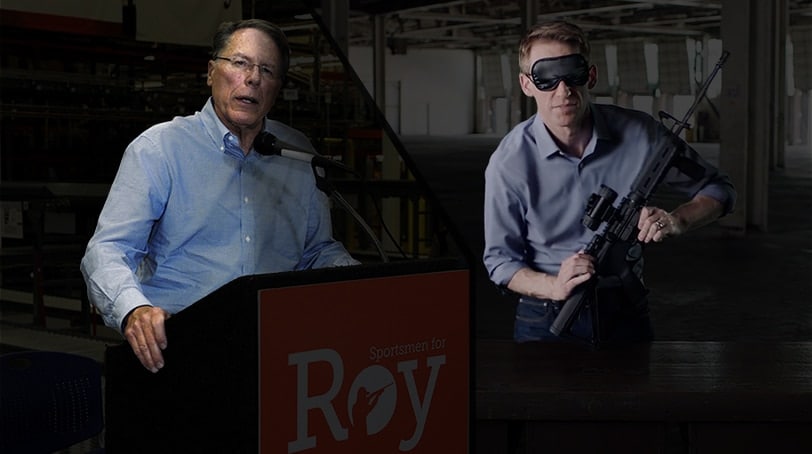 The National Rifle Association on Thursday night responded to a political ad showing the Missouri secretary of state assembling an AR-15 rifle blindfolded to illustrate his military bonafides – the group calling the act a “distraction” from his “anti-Second Amendment voting record.”

The statement came in the form of a fact-check emailed to Guns.com that focused on Jason Kander’s statement that he supported the Second Amendment while in the legislature.

Kander is currently embroiled in a heated Senate race against sitting Republican Sen. Roy Blunt, who was the target of Kander’s latest ad and top recipient of campaign donations from the NRA. Blunt has received some $60,550 from the gun rights group since 1998, the Washington Post reported, using data from the Federal Election Commission and the Center for Responsive Politics.

The claim linked to a website called “Kander Watch,” which is funded by the Friends of Roy Blunt, a political action committee that has only publicly disclosed $1,000 in contributions to the candidate, according to the Center for Responsive Politics.

Though it did concede Kander’s military service was to be appreciated, the NRA stuck to its guns and called him out for a vote he cast in 2009.

“While we respect Sec. Kander’s service to our country, lying about his record on the Second Amendment while assembling a rifle does not translate into support for law-abiding gun owners,” the NRA said in an emailed statement to Guns.com. “It doesn’t matter how well you know your way around a gun when you regularly vote against law-abiding citizens’ constitutional rights.”

The gun rights group last week put out an ad against Kander, criticizing him for voting against a bill that would have expanded the “Castle Doctrine,” which holds that a person has every right to defend themselves and their family in their home and extends the legal protections they enjoy should they shoot and potentially kill an intruder.

Missouri’s state legislature on Wednesday overrode Gov. Jay Nixon’s veto of Senate Bill 656, which, among other provisions, would expand Castle Doctrine protections to “anyone legally allowed into your home, vehicle, business and property,” according to the NRA, which applauded the move.

The bill also makes Missouri the 11th in the Union to allow the right to carry a concealed handgun without a permit. Guns.com previously reported both the House and Senate approved the measure  by veto-proof margins earlier this year, but that didn’t stop Nixon from vetoing it in June.

Kander’s 2009 vote wasn’t the only gun-related one cast during his four-year stint in the Missouri House of Representatives.

More recently, Kander voted to lower the state’s concealed carry age from 23 to 21 for Missourians and from 21 to 18 for military service members, as well as a resolution to re-affirm the rights of gun owners.

When pressed via several emails on these presumed pro-gun votes, the NRA responded (see below), though it could be said that when compared to a recent constitutional carry win for the state, the lowering of age restrictions pales in comparison. Still, it would be more accurate to say Kander is weak on gun rights when taking this comparison into account.

The NRA also took issue with the fact that Kander didn’t fill out the group’s questionnaire it uses to grade candidates on their support of gun rights. The group further took credit for Kander’s ad, saying it forced him to address the issue.

“It’s telling that Kander remained silent on the Second Amendment until forced to address the issue by the National Rifle Association,” the NRA said.

The gun group also called out Kander for not including any mention of the Second Amendment on his website.

A quick search of Kander’s campaign website reveals  only a mention of guns in promotion of his latest ad, which touts his support of background checks to keep suspected terrorists from gaining “the same access to guns as law-abiding Americans,” a sticky subject for the NRA and for Republicans.

“The Second Amendment is not a priority for Jason Kander. The only reason he is running this ad now is because the NRA is successfully communicating his anti-gun history to voters – a fact that is damaging to Jason Kander,” the NRA said. “This latest advertisement will not fool Second Amendment supporters. Law-abiding gun owners across Missouri and America deserve a candidate who can stand behind their voting record.”

Jason Kander voted against allowing people to use a firearm for self-defense on property they rent or lease.  Self-defense is a fundamental right, it is not based on whether you can afford to own your own home. [HB 668, 2009]

In addition to Castle Doctrine expansion, HB668 also lowered Missouri’s concealed carry age from 23 to 21. Kander was a vote against that age reduction. Although Kander cites a 2011 vote to lower the CCW age from 23 to 21 for Missourians and to 18 for military members, he doesn’t tell you that he voted against it in 2009 before he voted for it. This is a typical politician looking to have it both ways, and it is behavior that voters are fed up with.

In 2014, Kander did not support Amendment 5, The Missouri Right to Bear Arms. He failed to publicly support Missouri gun owners who overwhelmingly voted Yes on Amendment 5 and supported enshrining their Second Amend rights against the anti-gun policies of Barack Obama and Hillary Clinton.

Jason Kander has endorsed Hillary Clinton for president, which means he will vote to confirm her anti-gun Supreme Court nominees. It also means that he has endorsed a presidential candidate who said the Supreme Court got it wrong on the Second Amendment with their landmark Heller ruling, said that an Australia style gun confiscation system is worth looking at and has equated the NRA with Iranians and communists by calling us her enemy.

He supports “universal” background checks, which will only work if accompanied by a national gun registry.

He refused to fill out the NRA-PVF candidate questionnaire regarding his views on the Second Amendment.