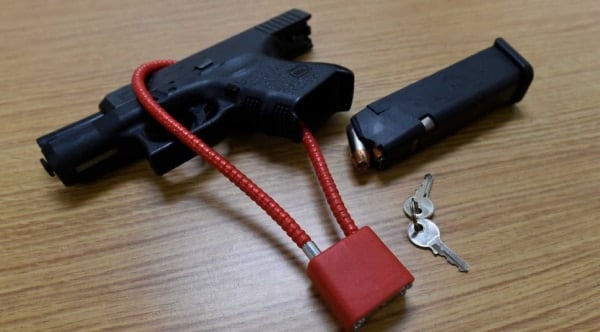 A hand gun and cable lock sit on a table at the Albany Police Headquarters in Albany, N.Y., where police are distributing free gun locks to coincide with the implementation of a new law requiring gun owners to store their firearms securely. (Photo: Skip Dickstein/Albany Times-Union)

A survey of nearly 1,300 parents in Missouri and Illinois found three-quarters believe pediatricians should counsel patients on safe firearm storage practices in the home, though only one-third reported having such conversations with doctors.

The findings, published Wednesday in the Journal of Pediatrics, will help pediatricians communicate with families the best ways to prevent firearms-related injuries and deaths without causing offense or violating state laws, according to lead author Dr. Jane M. Garbutt.

“Many physicians feel a professional obligation to discuss gun-violence prevention, but they don’t because they are not sure what to say or what they’re legally allowed to say,” she said in an interview with News-Medical Wednesday. “Our research is a step toward finding a way to discuss firearm safety that is acceptable to both physicians and parents.”

The most recent data available from the U.S. Centers for Disease Control shows 2,465 children under age 20 died from gun-related incidents in 2013.

“I have some real concerns with firearms ownership being discussed with doctors,” she said. “For a number of reasons, one is that although it appears benevolent and motivated by concern for children’s safety, there are some real risks.”

Lightfoot said physicians collect data on all patients under the federal mandate of the American Recovery and Investment Act — meaning firearm ownership could be noted and stored digitally.

“All gun owners should be concerned in disclosing gun ownership to any entity that ‘collects’ this information in any form,” she said. “It essentially helps to create a database of gun owners and puts them at risk to be targeted on numerous levels.”

Lightfoot noted both The American Medical Association and the American College of Physicians maintain “anti-gun biases” and pressure members to do so, as well.

“The medical community as a whole is uneducated on firearms and unqualified to be counseling patients on safe gun handling/storage of firearms,” she said. “Thirdly of course is the potential of biased advice. We have had women within our organization/followers that have been verbally reprimanded, humiliated and guilted when revealing their gun ownership to a physician. This really is a breech and misuse of the trust we place in our physicians.”

The American Academy of Pediatrics, in a policy statement on its website, says “the absence of guns from children’s homes and communities is the most reliable and effective measure to prevent firearm-related injuries in children and adolescents.”

It also supports expanded background checks and assault weapon bans as part of “a number of specific measures to reduce the destructive effects of guns in the lives of children and adolescents, including the regulation of the manufacture, sale, purchase, ownership, and use of firearms; a ban on semiautomatic assault weapons; and the strongest possible regulations of handguns for civilian use.”

Garbutt told News-Medical the survey reveals important nuances about how to address gun safety with parents, such as avoiding direct questioning about ownership and focusing instead on teaching children proper responses to discovering firearms in and outside of the home.

“If we treat firearm safety like we do other safety-proofing precautions, it removes judgment,” she said. “It’s similar to advising parents to keep medications and household poisons such as bleach locked up and secure. This approach also may help parents to feel more comfortable discussing gun ownership with other parents. It’s perfectly acceptable to ask another parent about car seats when carpooling, for instance. If we can get to this comfort level discussing firearms, it may decrease childhood injuries and death.”