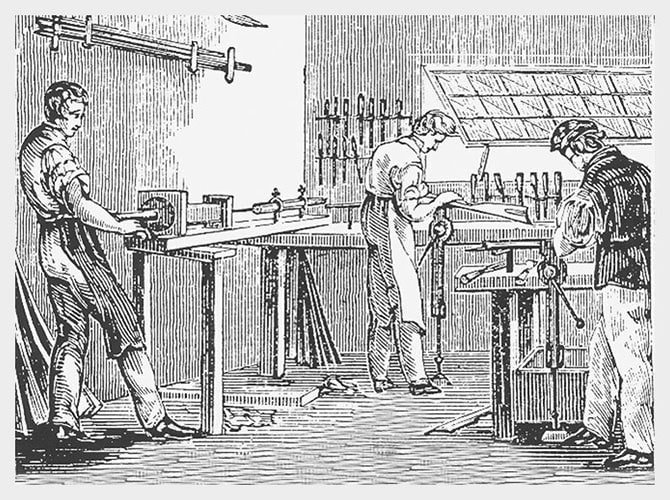 An artistic depiction of workers manufacturing the 1841 “Mississippi” rifle for the U.S. military. (Photo: Remington Arms)

A New York congressman has asked the U.S. legislature to recognize the 200th anniversary of the country’s oldest gun maker, Remington Arms Company.

On Thursday, Republican Rep. Richard Hanna filed the resolution, which reads like a brief history lesson on the iconic gun company founded in upstate New York in 1816.

According to the bill, Eliphalet “Lite” Remington II, the son of a blacksmith, grew the company from humble beginnings and it quickly earned a reputation for its craftsmanship. As an early adopter of mass production technics, Remington gained an edge when competing for U.S. military contracts.

In 1848, Remington started supplying arms for the Army and Navy, and by 1870 it had produced more guns than the entire country of England. Remington filled orders during the Civil War, the Great War, World War II and continued to supply weapons throughout the following decades.

“This company is not just a symbol of the Nation’s heritage, but an example of this country’s entrepreneurial spirit, a business that has been shaped and protected by the Bill of Rights and the fundamental values of free will and self-determination,” the bill says.

Today, Remington is not just the oldest but also one of the largest gun makers in the country. According to data published by federal regulators, Remington produced just shy of 1 million rifles, the most for any company in 2014, and almost half the new shotguns in the country with 414,000.

However, the company has been breaking even financially, showing losses for the past few quarters, but Remington’s senior management has explained the losses were due in large part to consolidating manufacturing efforts for its more than a dozen brands. The company, now headquartered in North Carolina, has been a growing conglomerate since 2007.

During the 2014 election cycle, union workers from Remington’s Ilion, New York, factory endorsed Hanna over his Tea Party opponent, who had called him soft on New York’s strict gun control laws and questioned his support for Remington.

Hanna’s bill has been assigned to the House Energy and Commerce committee. The House returned from summer recess on Sept. 6, but shuts down again on Sept. 30 for fall break. Congress will return after the elections on Nov. 14.