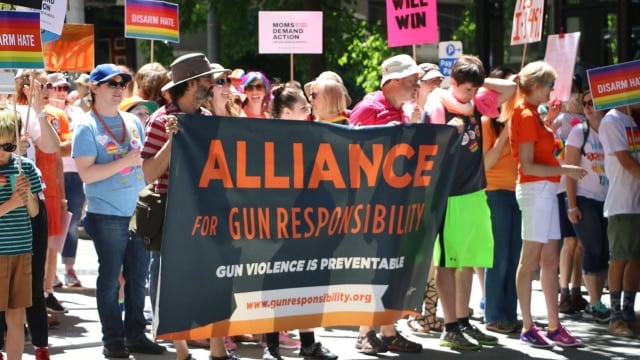 Gun control PACs and wealthy donors have bankrolled a push to add a voter referendum on Washington state’s Extreme Risk Protection Order to the ballot this November.

The byzantine 21-page proposal, I-1491, would establish protection orders in the state to allow families and law enforcement to ask the courts to issue a temporary restriction on an individual’s gun rights.

A similar measure was adopted in California after a disturbed man attacked the campus of the University of California Santa Barbara in Isla Vista. Prior to that incident, parents of the suspect tried unsuccessfully to get authorities to take away his weapons.

Taking point on I-1491 is the Alliance for Gun Responsibility, the front group for a 2014 measure fueled by huge influxes from billionaire tech gurus that led to universal background checks in the state. In a repeat of that campaign, which saw millions fed into the engine to push through to voters, a handful of organizations and donors with deep pockets have funded the latest drive.

In the latest filings with the state Washington Public Disclosure Commission, the group reports raising $3,499,263 for the effort. Of this sum, just $130,137 is listed as small contributions with the rest being large cash or in-kind donations.

Former New York Mayor Michael Bloomberg’s Everytown group has delivered at least $584,775 to the campaign through Aug. 31 in cash and staff services, while former U.S. Rep. Gabby Giffords’s Americans For Responsible Solutions have kicked in $250,000 as of Sept. 2.

Where has the money gone? The largest single outlay is no less than $1.1 million given to PCI Consultants, a nationwide petition management firm based in Los Angeles brought in to gather signatures. PCI’s past clients helped push expanded background checks on gun sales in Washington state, anti-hunting agendas in Maine and California Lt. Gov. Gavin Newsom’s Prop. 63 initiative this year. Lesser amounts have been spent on ad and event production and setting up offices.

“Extreme Risk Protection Orders can be an important tool for police officers who see the impact of gun violence on a daily basis, and to family members who see early warning signs of violent behavior up close,” argues Seattle Police Department Assistant Chief Robert Merner, in a statement made through the referendum’s backers.

A pro-gun lawmaker, State Rep. Lynda Wilson, R-Vancouver, worries the measure is an overreach and should have been debated through the legislative process.

“I support greater protections for victims from violent abusers,” Wilson told The Columbian. “However, this is a poorly written initiative that I can see will lead to abuse due to the lack of due process and broad definitions. Another case where the issue should be fully vetted and scrutinized by the Legislature to make sure it gets done, and done right.”