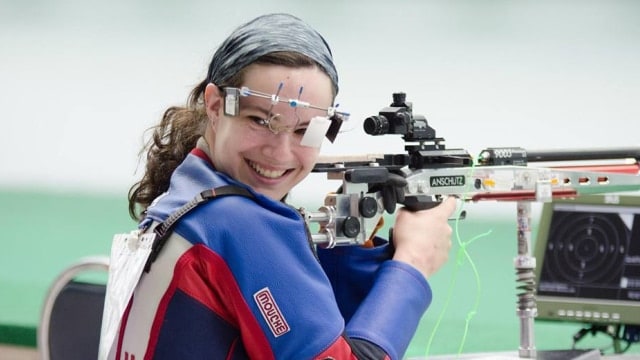 McKenna Dahl started shooting at age 12 and has spent the past two years honing her sport at the U.S. Olympic Training Center in Colorado Springs, Colo. (Photo: USAShooting.org)

The 20-year-old from Arlington, Washington made history last week by becoming the first female competitor to medal and picked up the first U.S. Paralympic Games medal in Shooting since 2004.

Dahl, who is competing in Mixed 10m Air Rifle Standing SH2, R5 – Mixed 10m Air Rifle Prone SH2, and Falling Target Rifle SH2, was born with amyoplasia arthrogryposis in her left hand and both of her feet, causing her muscles not to form properly, as noted by USAShooting.org.

Still, she won the she won bronze in the R5 (Mixed 10m Air Rifle Prone SH2) event at the Centro Nacional de Tiro Esportivo in Rio de Janeiro, Brazil on Sept. 13, with a score of 189.5. She was the only female competitor in the final field of eight.

“It’s overwhelming!” said Dahl in a statement from Team USA. “I knew about half way thought the Final that I was in contention for a medal and I was probably going to succeed in doing so. A lot of it was really just shot process and breathing, keeping everything together and doing what I needed to do.”

As reported by the National Shooting Sports Foundation in 2012, Dahl got her start in the sport in the summer of 2009, while attending Camp Access, a summer camp for kids with disabilities in her home state. Eschewing basketball and other sports, the then-12-year-old camper went to the range and found she liked shooting.

“I could be really competitive [in shooting], but also competitive with myself,” she said. “I could challenge myself to be better versus trying to do better as a team.”

Her medal is the first by an American in Paralympic shooting since Dan Jordan won silver in Men’s Three-Position Rifle in 2004.

First held after WWII, the Paralympic Games have become one of the largest international sporting events and Paralympians strive for equal treatment with non-impaired Olympic athletes.