Union leader says Question 1 is not about the Second Amendment 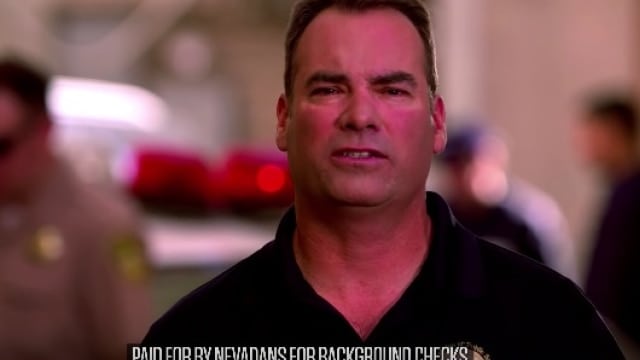 Jim Dunlap, appearing in an ad for Nevadans for Background Checks, on Aug. 30.

Jim Dunlap, president of the Nevada Association of Public Safety Officers, told the Las Vegas Sun he disagrees with most of the state’s sheriffs when it comes to Question 1.

“As top law enforcement officials, they have an obligation to their employees and to the people who elect them,” he said. “They say their opposition is about the Second Amendment, but our stand is on public safety. This measure will make it safer for our communities, safer for public employees and safer for the people we represent.”

“With this background check, we’ll close the loophole and prevent them (criminals) from getting a weapon at a gun show or meeting a guy in a parking lot (after using a website to set up a gun sale) and going home still angry,” he said. “We are saving people’s lives.”

Question 1, if approved, would extend federal background checks to private sales, including those at gun shows and others arranged through websites like ArmsList. Those who violate the law would face a gross misdemeanor charge and a potential penalty of one year in prison and/or a $2,000 fine.

At a meeting of the Nevada Sheriffs’ and Chiefs’ Association in July, Furlong criticized Question 1 for ignoring the role mental health issues play in gun violence.

“Any bill that does not address mental health, which I believe to be the core cause of the violence we’ve had across the country, does not meet my expectations,” he said. “Mental health has to be addressed.”

Lincoln County Sheriff Kerry Lee told the Lincoln County Record last month the referendum was nothing more than a “feel good measure” with a slew of consequences for law enforcement.

“We feel the mental health issue is a lot bigger than background checks between this or that individual,” he said. “It (Question 1) is going to put a huge burden on law enforcement, because if you sell a gun to a neighbor or a second party, that person has to undergo a background check. Now, we’re going to be inundated with these type of things. Not a big issue with gun show sales, but rather the private party sales.”

Dunlap rejects the notion that expanded background checks will make it harder on law enforcement.

“What people need to understand is that crimes are generally reported to us (as opposed to officers rooting them out),” he said, per The Las Vegas Sun. “Are we going to go door to door and ask, ‘Did you sell a gun to someone who shouldn’t have one?’ No, we’re not, any more than we go door to door asking, ‘Are you selling illegal drugs?’ If people report to us that guns were sold illegally, we’d respond. And as with any situation, we prioritize our calls for service. So it won’t be more taxing.”

Nevada is one of a handful of states — including Maine and California — with voter referendums expanding gun control on the November ballot.