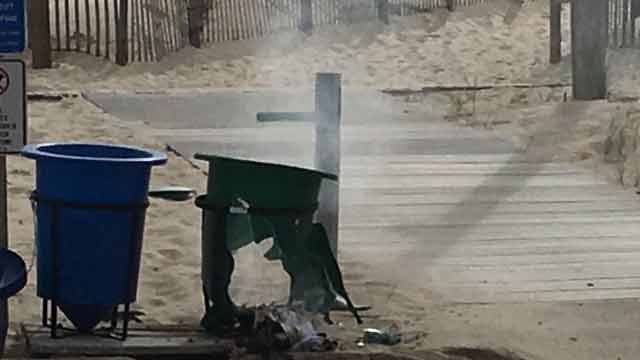 Multiple pipe bombs were placed in a trash can, but only one exploded. (Photo: Kathy Madsen/Twitter)

An investigation is underway after a pipe bomb exploded in Seaside Park, New Jersey, as a scheduled 5K race was set to begin Saturday morning.

The blast occurred about 9:35 a.m., but no one was injured. The turn out for the race, which was to benefit the U.S. Marine Corps and Navy, was far greater than expected and registration for the roughly 3,000 participants delayed the race’s planned starting time. As a result, no one was near the blast when it occurred, but had the race started on time, a good number of people would have likely been hurt.

Furthermore, while multiple devices were planted in a trash can on the side of the street where the race was to start, only one exploded.

“It appears it didn’t do the damage it was supposed to,” said Al Della Fave, spokesman for the Ocean County Prosecutor’s Office, the Asbury Park Press reported.

Fave said the failed bomb was designed to cause harm with flying shrapnel.

Multiple law enforcement agencies are investigating the incident, but no suspects were in custody as of Sunday night. Officials said they did not believe the blast was related to a Saturday night explosion in New York that injured 29 people or a knife attack at a Minnesota mall the same day, but declined to comment on whether the crime was considered to be an act of terrorism.

“You would have to assume that at a military-type event, the U.S. Marines, a device is placed along the route of a charity event, it would be hard to think it would be anything else,’’ Della Fave said.

New Jersey Gov. Chris Christie said no one should jump to conclusions or put out information that has not been confirmed. However, he noted that he personally considered the blast to be an act of terrorism, with the bigger question being who’s responsible. Christie also said authorities have some “promising leads.”

“The fortunate thing here in New Jersey is that no one was injured,” Christie said. “We pray for those people who were injured in those other attacks.”