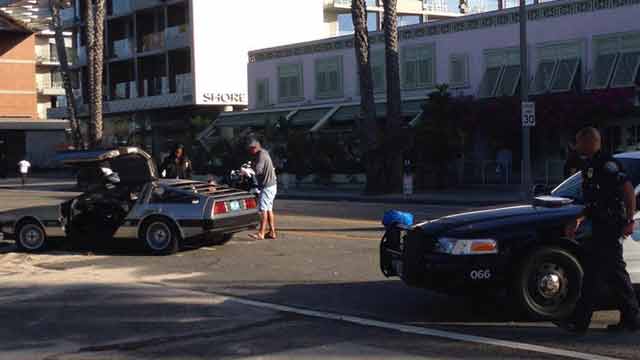 A one-of-a-kind incident in Santa Monica, California, Thursday morning ended with a man behind bars after he carjacked the owner of a vintage DeLorean and led police on a pursuit.

The owner of the DeLorean DMC-12 was hanging out just after 7 a.m. as fans sort of gathered around to admire the vehicle made famous by the iconic 80’s flick “Back to the Future.” But one spectator was apparently a little too enthralled with the vehicle and took it from the owner by force.

Police were called and it didn’t take them long to catch up with the vehicle.

“They are very unique,” said Lt. Saul Rodriguez with the Santa Monica Police Department. “That kind of stands out quite a bit.”

And although the suspect, 32-year-old Brian Scott Cottrill, could have easily led police on a high-speed chase, he instead chose to take his time eluding authorities and creeped along slowly during the pursuit. After fleeing from police for about half a mile, Cottrill then crashed the vintage vehicle into another car.

Cottrill, who had an outstanding warrant, was arrested and booked on suspicion of carjacking and reckless evading.

Cottrill was left with minor injuries from the crash, as was the DeLorean.