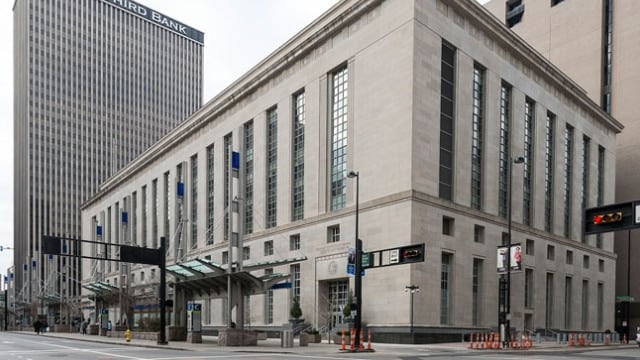 The Potter Stewart U.S. Courthouse in Cincinnati is the home of the U.S. 6th Circuit Court of Appeals. (Photo: ca6.uscourts.gov)

A split 10-6 panel for the U.S. 6th Circuit Court of Appeals last week found that an involuntary commitment to a mental health facility might not be enough to strip away an individual’s gun rights for life.

An en banc panel sitting in Cincinnati on Thursday found that Clifford Charles Tyler, 74, was denied his Second Amendment rights when he was prevented from buying a gun years after a 1986 stay in a mental institution.

Tyler had been involuntarily committed for less than one month after undergoing what court papers term as an emotionally devastating and financially crippling divorce from his wife of 23 years that left him with thoughts of suicide. As a byproduct of that committal, he was termed a prohibited firearms possessor, effectively stripped of his rights to have a gun. Since that time, Tyler has been in good mental health, has no criminal history and has remarried.

In February 2011, the National Instant Checks System, used by federal firearms licensees to screen firearms transfers, denied a sale to Tyler because of his 1986 record. His appeal to amend his record was rejected because the Bureau of Alcohol, Tobacco, Firearms and Explosives lacked funding for a relief-from disabilities program that could have reviewed his case. Although Congress had authorized such a program, it has since been defunded.

In May 2012, Tyler filed suit in a Michigan federal court seeking relief in the case of Tyler v. Hillsdale, which was rejected. In 2014, a unanimous three-judge panel of the 6th Circuit reversed that decision, but was challenged by the government with the judges voting to send the case back to retry in front of the entire court, resulting in last week’s decision.

The majority ruling held that there was merit to Tyler’s claim that the inflexible, lifetime ban completely and permanently extinguishes his core right to use a firearm in defense of hearth and home, which the government could not defend.

“None of the government’s evidence squarely answers the key question at the heart of this case: Is it reasonably necessary to forever bar all previously institutionalized persons from owning a firearm?” wrote Circuit Judge Julia Smith Gibbons for the 10-member majority. “However, [the law] imposes a lifetime ban on a fundamental constitutional right. More evidence than is currently before us is required to justify such a severe restriction.”

Smith Gibbons is an appointment of President George H. W. Bush and in 2014 was one of three judges from the Circuit who upheld Tyler’s rights.

In a separate concurrence, Circuit Judge David William McKeague underlined Smith Gibbons’ argument, noting, “Mental illness is not static, so it cannot be constitutional to permanently prevent Clifford Tyler from exercising his Second Amendment right without  affording him some sort of process to demonstrate that the non-permanent label of  ‘mentally  ill’ no longer applies to him.”

Circuit Judge Karen Nelson Moore, writing for the six-judge dissent, argued the current prohibition is constitutional saying, “The government has demonstrated that [the law] is substantially related to Congress’ objectives of reducing the substantial homicide and suicide rates caused by firearms.”

The suit now heads back to District Court in Michigan from which it sprang for determination on the continued ban on Tyler’s specific case.

It is the latest installment of federal courts finding that, in some cases at least, current law doesn’t support stripping gun rights from some individuals. Earlier this month an en banc panel for the U.S. 3rd Circuit held that relatively minor sentences passed on two men by state courts for misdemeanor crimes were not enough to void their gun rights.