What we know about the New York and New Jersey bombings 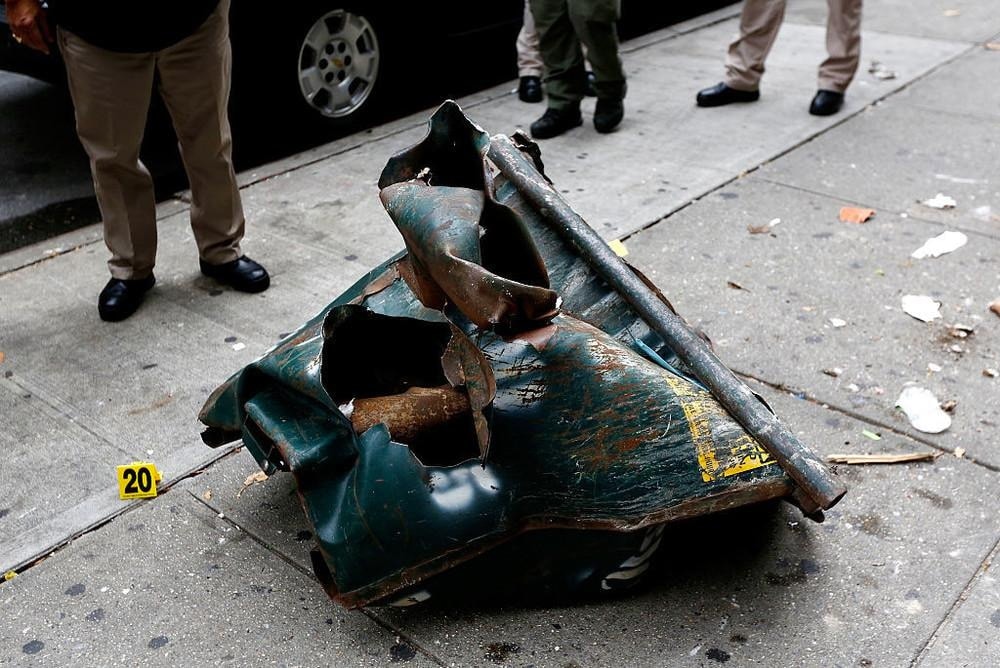 A dumpster that was damaged during the bomb that exploded in Manhattan on Saturday night. (Photo: Justin Lane-Pool/Getty Images)

After a shootout with police Monday, the man suspected of detonating explosives in New York City and at a Marine Corps charity run in New Jersey this weekend was apprehended.

Ahmad Kahn Rahami, 28, a native of Afghanistan who was naturalized in the U.S., allegedly shot an officer in the torso during the arrest in Linden, New Jersey, NBC New York reported. Because he was wearing a bullet-proof vest, the officer’s injury was not critical. Another officer was reportedly injured by flying glass. Rahami was taken to an area hospital after being shot several times and is expected to survive.

While searching for the suspect, police reportedly received a call from a bar owner about a man sleeping in the doorway of his business. Not knowing the man was the suspect involved in the bombings, the officers approached Rahami with little caution. As they attempted to wake him from his slumber, officers reportedly recognized his Rahami’s face and ordered him to show his hands. Rahami opened fire, striking one of the officers and began walking down the street, reportedly shooting at vehicles driving by before he was apprehended.

The Manhattan explosion at about 8:30 p.m. Saturday injured 29 people, who have since been released from the hospital, NYPD said.

“Thankfully, none of these are life-threatening injuries,” said FDNY Commissioner Daniel Nigro, as reported by the New York Post.

Some four blocks away, an unexploded pressure cooker was reportedly found with a cellphone and wires attached. It was recovered by police and taken to a nearby shooting range where it was detonated. Authorities told the Associated Press the device was similar to the one used in the deadly Boston Marathon bombing in April 2013.

The second exploded device was placed in a trash barrel and timed to detonate when runners happened by during the marathon at Seaside Park in New Jersey. Because the race was off schedule, it had not started when the explosion occurred and no one was injured as a result.

Both explosions were likely triggered by the flip phones attached to the devices.

In a another, likely related incident, police found a backpack full of pipe bombs at a train station in Elizabeth, New Jersey late Sunday, the New York Times reported. Those were detonated by a bomb robot.

During the course of investigating, authorities raided several buildings in the area of the Elizabeth blasts, including the fried chicken restaurant owned by Rahami’s father. Five people believed to be associated with Rahami were reportedly taken into custody on Saturday during a traffic stop. No charges have been filed.

Authorities believe the man seen on surveillance footage retrieved from two of the incident sites is Rahami. The suspect can allegedly be seen planting something in a trash barrel on the marathon route prior to the explosion. In the other video, a man can be seen placing a bag containing the pressure cooker on the sidewalk.

New York City Mayor Bill de Blasio on Saturday said the incidents were “an act of terror,” but also tweeted there are no credible threats against his city.

Investigation is ongoing. Though we believe this was an intentional act, there is no credible terror threat against NYC at this moment.

Though officials have not linked the blasts to a terrorist group, Rahami had traveled to Afghanistan several times in the past year, CNN reported.

Officials, including President Obama in a media briefing Monday, say the bombings are not connected to a series of stabbings in Minnesota.