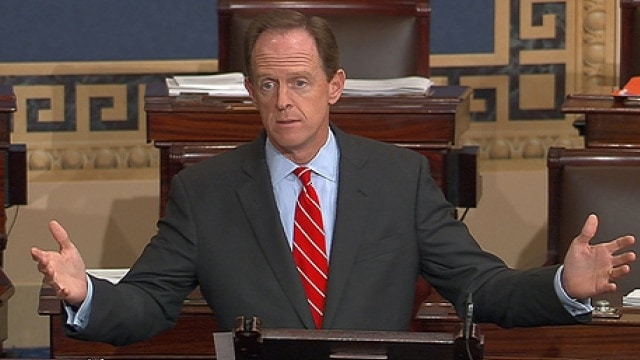 Faced with reelection and in the wake of several mass shootings, some swing-state Republicans are backing measures to tighten regulations on gun ownership to prevent terrorism.

It’s no surprise that one of those is Pennsylvania Sen. Pat Toomey, who was said to have “crossed party lines” to “put our safety ahead of partisan politics” in his backing of background checks and tightening of gun laws for suspected terrorists.

The ad was paid for Michael Bloomberg’s Independence USA super PAC and its claim labeled “mostly false” by Politifact. Bloomberg started a gun control group called Mayors Against Illegal Guns, which was merged with other groups to form Everytown for Gun Safety.

Another Republican receiving support in his campaign from a gun control group is Illinois Sen. Mark Kirk, who is being backed by Americans for Responsible Solutions. That group was founded by Arizona Rep. Gabrielle Giffords, who was severely injured in a shooting in 2011.

As is being reported on several political blogs this week, the subtle shift in ideology could be a signal for how the fight over gun control and gun rights is changing.

Fighting terrorism is typically seen as a core Republican tenet, along with protecting gun rights. Any law that strengthens gun regulation is seen as an affront to those rights in the eyes of hard core advocates.

With the recent introduction of several bills meant to prevent those on the U.S. government’s no-fly list from being able to purchase guns, the GOP’s uncompromising platform is seeing a pivot from within its ranks.

A renewed interest among Democrats in the No Fly/No Buy legislation was sparked following a series of bombings in New York and New Jersey over the weekend.

“We can argue from now on about whether this bill would have prevented this weekend’s attacks,” said Senate Minority Leader Harry Reid on Monday. “But one thing is for sure, it would prevent the next attack.”