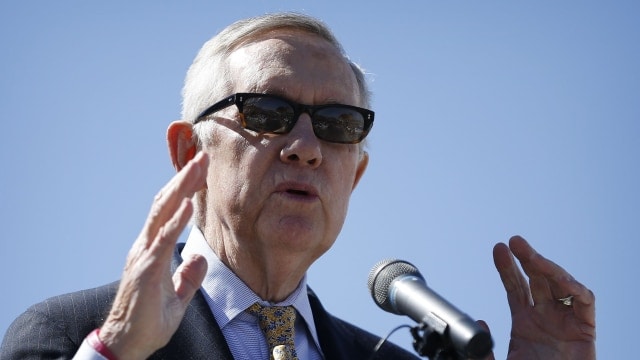 Reid’s remarks came in reaction to a series of bombings over the weekend in the New York metropolitan area and New Jersey as well as a shootout Monday with the primary suspect that left 32 injured.

“Congress can do more to prevent terror. We should close the loophole that allows potential FBI terror suspects to legally purchase weapons,” noted the Nevada Democrat on social media.

This came as the outgoing minority leader addressed lawmakers on the Senate floor, arguing so-called No Fly/No Buy legislation could prove a tool to stopping future incidents.

“We can argue from now on about whether this bill would have prevented this weekend’s attacks,” said Reid in the Senate. “But one thing is for sure, it would prevent the next attack.”

CNBC reports that the suspect in the Chelsea bombing was not on the FBI’s terrorist watch list nor a list maintained by the New York Police Department.

In a statement issued by his office, Reid appeared to set his sights on binary target compounds such as Tannerite as being a terror tool. Several media outlets, including USA Today and Forbes noted that such target marking compounds may have been used in the Chelsea bombing, though others disagree.

“You go to a gun store in Las Vegas and you can buy explosives—explosives. They put them up in the trees,” said Reid. “We don’t have that many trees in Nevada. They put explosives up in a tree and shoot at them and it blows it up, blows up the tree and anything around it. That’s for sport. Lots of people can walk into a gun store and buy that, including suspecting terrorists.”

Reid was not alone in his call to action.

Gun control advocacy groups Everytown and Moms Demand Action were quick to call for increased firearms restrictions Monday in the wake of the weekend’s terror attack.

“One thing is for certain, however: America’s weak gun laws allow terrorists easy access to firearms,” noted MDA on their social media account. “In fact, in 2011, an al Qaeda operative urged would-be terrorists to exploit loopholes in our laws to get guns and carry out acts of terrorism on Americans. It’s time for Congress to close this dangerous gap in our federal gun laws.”