ATF compliance investigator ranks stagnant as FFLs on the rise 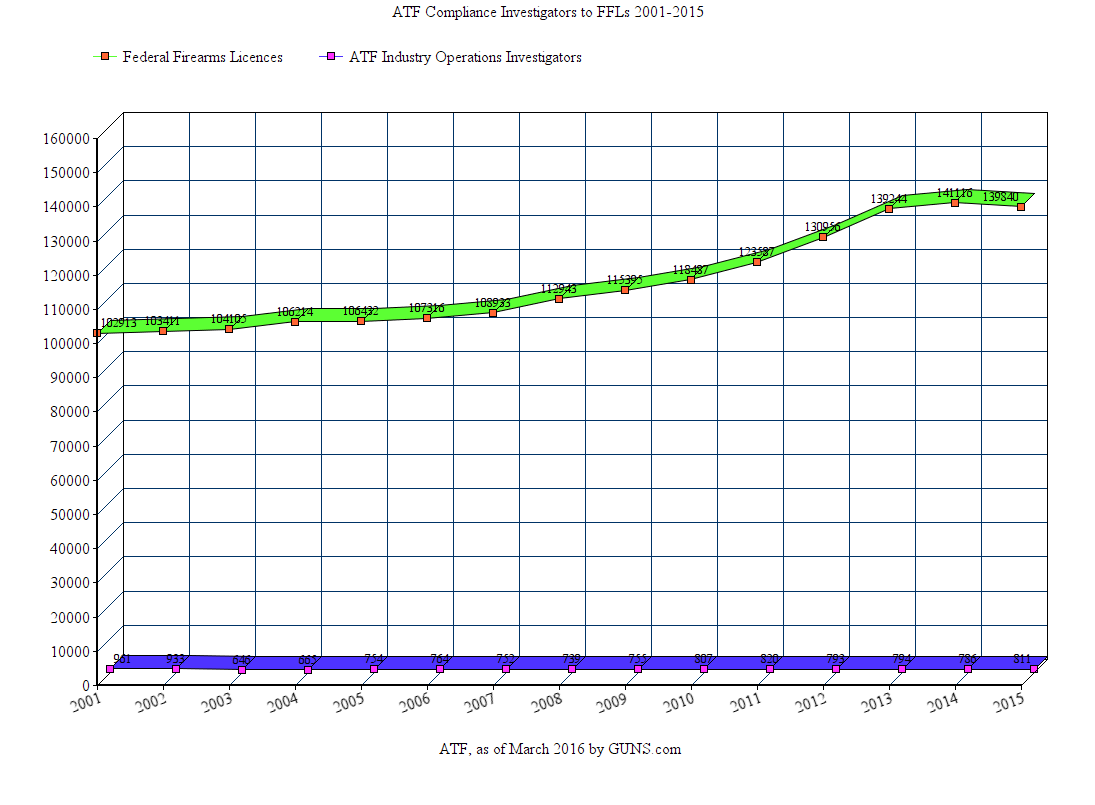 The numbers of Industry Operations Investigators, or IOIs, have remained fairly constant in the past 15 years as FFL numbers have been on the rise

The Bureau of Alcohol, Tobacco, Firearms and Explosives has basically the same number of compliance investigators as it did 15 years ago though the number of licensees have surged by a third.

The agency as of March had 5,026 employees, about half of which are badge carrying Special Agents who conduct criminal investigations and make arrests. The remainders are administrative, technical, and professional personnel as well as some 811 Industry Operations Investigators, or IOIs. These GS-1801/1811 employees start at about $27,000 a year and get about 10-weeks of training to conduct qualification and compliance inspections on Federal Explosives Licensees and Federal Firearms Licensees such as gun dealers, pawnshops and manufacturers.

A recent report by a San Antonio area NBC-affiliate contends there is a national shortage of these investigators, highlighting the San Antonio ATF field office where 11 inspectors are responsible for checking gun dealers in 50 counties. The report drew quick echo from national gun control groups, with the Washington, D.C.-based Brady Campaign reposting it through social media, asking, “Gun dealers are subject to annual inspections, but are there enough inspectors to get the job done?”

According to figures provided by the ATF to Guns.com, the tale of IOIs has been one of ups and downs.

In 1973, when the bureau was established as its own agency, it had 826 Investigators. In 2001, when President George W. Bush took office, IOIs numbered 961 but went on a sharp decline, dropping to just 646 in two years. Since then, the numbers have resurged steadily to 807 by 2010 and have remained at about that level for the past five years with 811 positions as of March 2016.

When compared to the number of FFLs, that number peaked at 284,117 in 1992. The following year, this figure began to decline as the Clinton-era ATF cracked down on “kitchen counter FFLs” by raising fees from $30 for a Type 01 license to $200 at the same time the Brady Bill requiring mandatory background checks on over-the-counter transfers became law. This downward spiral continued until 2001 when it bottomed out at just 102,913 active FFLs of all types, but has been gradually climbing ever since.

In short, the agency has fewer IOIs now than in 2001 but has seen the number of FFLs jump by over a third in the same period.

What does that mean for compliance inspections?

A 2013 Department of Justice Inspector General report found that over 58 percent of FFLs had not been inspected within five years.

Figures drawn from the latest ATF Annual Firearms Manufacturing and Exportation Report show that compliance inspections of FFLs in 2015 are at the lowest numbers in the past decade with 8,696 inspections performed, or a rate of about 6.3 percent of FFLs. This is down from 2014’s 10,437 inspections and is the lowest number recorded since 2006.

However, in most cases, IOI’s found little to complain about.

Of those inspections, almost half — 3,848 — found no violations. Typically, those found with violations were given a warning letter or conference with the most common problem cited being tardy entries into the dealer’s bound book firearms log, or 4473 forms that had not been filled out all the way, such as missing a date.

In all, the agency found 7,707 firearms inventory discrepancies during compliance inspections last year. In 2015, investigators recommended revocation or denial of a license in just 46 cases.

“We do the best we can with the resources we have,” Ginger Colbrun, an ATF spokesperson, told Guns.com on Tuesday. “If we had more resources we would do more.”