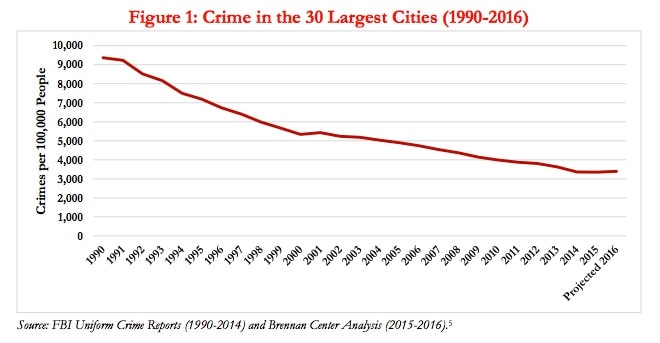 Despite a slight increase, crime rates throughout the country remain at an all-time low, according a report released Monday by the Brennan Center for Justice at NYU School of Law.

The report shows the national crime rate rise by 1.3 percent from last year and violent crime increase by 5.5 percent. Yet, even with the uptick, levels remain at the bottom of a 30-year trend.

Brennan researchers say their findings undercut media reports suggesting crime is out of control. “[T]he average person in a large urban area is safer walking on the street today than he or she would have been at almost any time in the past 30 years,” they say.

Also, researchers expect the murder rate to rise by 13.1 percent, but it’s largely due to Chicago where violence is up 16 percent and its murders attribute to nearly half of the national increase.

However, they’re calling Chicago an outlier and explain that the causes for the increase are still unclear. “[S]ome theories include higher concentrations of poverty, increased gang activity, and fewer police officers,” researchers say.

On the contrary, Baltimore and Washington, D.C., which have in the past contributed to a rise in murder rates, are expected to see significant decreases this year, researchers say. Murders in Baltimore are down 9.7 percent and 12.7 percent in Washington.

For the report, researchers compiled crime data from 30 cities and say details are up-to-date as of Sept. 19. However, data from eight of the cities was unavailable when the report was published.