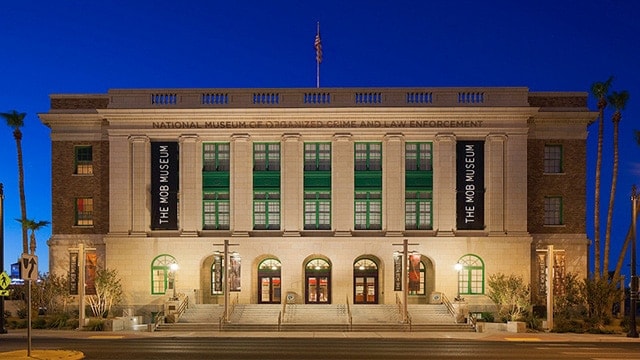 The Mob Museum in Las Vegas will host a livestreamed forum next week on Nevada’s background check voter referendum.

Officials with the non-profit Mob Museum, the National Museum of Organized Crime and Law Enforcement, said the town hall event, scheduled for Sept. 29 in the building’s historic courtroom, will be free and open to all state residents.

“One of the most important duties a museum performs is to facilitate dialogue about issues that relate to its subject matter and directly impact people’s lives,” said Jonathan Ullman, executive director and chief executive officer of the museum. “This event presents an opportunity for members of the community to understand the upcoming ballot initiative more thoroughly while participating in a civil and detailed discussion.”

Nevada’s ballot measure, Question 1, if approved, would extend federal background check requirements to include most private sales and transfers, such as those at gun shows and others arranged through websites like ArmsList. Violators would face a gross misdemeanor charge and a potential penalty of one year in prison and/or a $2,000 fine.

“We feel it important to host a balanced panel of local experts who will frame the issue and provide a public forum for questions and answers,” said Kimberly Kindig, the museum’s director of strategic partnerships.

College of Southern Nevada history professor and president of the Las Vegas League of Women Voters Sondra Cosgrove will moderate.

Gun control groups and a handful of public safety unions and retired law enforcement officials have urged voters to approve the measure as a way to keep firearms out of the wrong hands.

Question 1 is financed by former New York City Mayor Michael Bloomberg’s Everytown for Gun Safety. Ballotpedia says the group has donated close to $4 million in support of the initiative.

Meanwhile, 16 out of 17 Nevada sheriffs came out against Question 1 in July because of its multiple perceived flaws — including an added burden on law enforcement and a failure to address the role mental health plays in mass shootings.

“They got it from another criminal associate,” said Catherine Mortensen, an NRA spokeswoman. “They got it from a family member. They got it through a straw purchase. That’s where they send someone else in to buy it for them. … These criminals are going around the background check system already.”

The town hall begins at 7 p.m. and can be livestreamed here. Doors open to the public at 6 p.m.