Mass. Supreme Court rules black men may be justified in running from cops 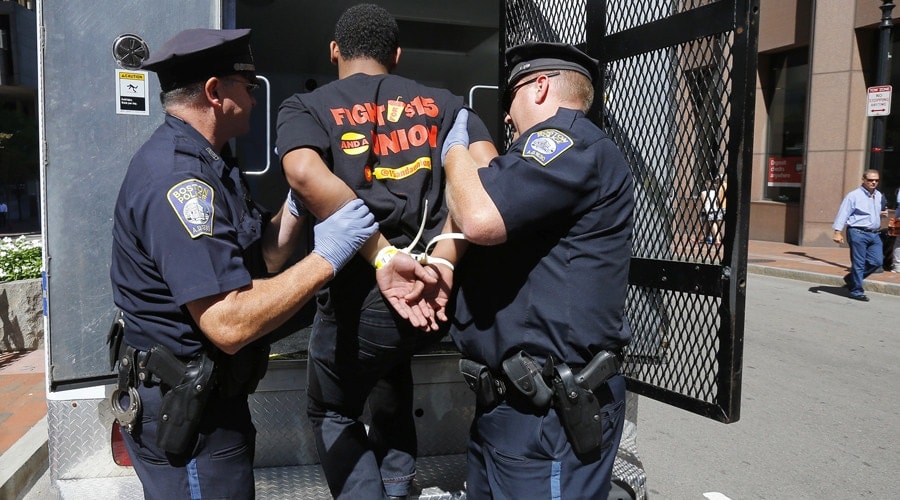 The Massachusetts Supreme Court, in a ruling that overturned a 2011 gun conviction, observed that black men may have tangible reasons to run from police.  (Photo: Brian Snyder/ Reuters)

In a decision handed down on Tuesday, Massachusetts Supreme Court observed that black men may have legitimate reasons to flee from Boston police and should not be deemed suspicious when they do so.

The observation stems from a case related to a gun charge the high court overturned. The charge levied against Jimmy Warren derived from his December 2011 arrest. At that time, police were investigating a break-in in Roxbury, Massachusetts. Officers had been informed that three suspects involved were all wearing hoodies or dark clothing.

A Boston cop saw Warren and another man, both in darker clothing, walking near a park. When the officer approached them, the two men fled. Cops caught up with Warren and arrested him. A search yielded no contraband on him, but officers discovered an unlicensed Walther .22 handgun in a yard close by. Police linked the gun to Warren and charged him with unlawful possession. He was later convicted.

Warren has played tug of war with Massachusetts’ courts since his arrest, fighting the conviction all the way to the state Supreme Court. There, the justices overturned his conviction, finding police had no right to stop Warren and that his decision to flee should not be used against him.

“Lacking any information about facial features, hairstyles, skin tone, height, weight, or other physical characteristics, the victim’s description ‘contribute[d] nothing to the officers’ ability to distinguish the defendant from any other black male’ wearing dark clothes and a ‘hoodie’ in Roxbury,” the court said in its ruling.

The Supreme Court added, “Such an individual, when approached by the police, might just as easily be motivated by the desire to avoid the recurring indignity of being racially profiled as by the desire to hide criminal activity. Given this reality for black males in the city of Boston, a judge should, in appropriate cases, consider the report’s findings in weighing flight as a factor in the reasonable suspicion calculus.”

A 2014 ACLU of Massachusetts report was used as evidence by the court to uphold its reasoning. That study found that 63 percent of Boston police and civilian encounters from 2007 to 2010 targeted blacks, despite the minority group only accounting for 24 percent of the population at that time. The study also found that 75 precent of encounters had absolutely no justification.

Matthew Segal, the legal director of the Massachusetts’ ACLU branch, categorized the decision as a “powerful ruling.”

“The state’s highest court, in talking about people of color, it’s saying that their lives matter and under the law, their views matter,” Segal told WBUR. “The reason that’s significant is that all the time in police-civilian encounters there are disputes about what is suspicious and what is not suspicious. So this is an opinion that looks at those encounters through the eyes of a black man who might justifiably be concerned that he will be the victim of profiling.”

Boston Police Commissioner Bill Evans was upset with the ruling, pointing to the ACLU study as inaccurate and biased against law enforcement.

“I’m a little disappointed that they relied heavily on a report that didn’t take into context who was stopped and why,” Evans said. “That report clearly shows that we were targeting the individuals that were driving violence in the city and the hot spots.”

Evans contends the department’s analysis shows no bias. He emphasizes that the department has been working since 2010 to improve accountability and relations with civilians. As part of its measures, Boston PD has implemented new training and documentation requirements. In addition, the city has required at least 100 officers to wear on-body cameras in a six-month pilot program beginning this month.

Evans wasn’t the only advocate speaking out on behalf of Boston police in opposition of the ruling. Jake Wark, spokesman for the Suffolk County district attorney, told the Boston Globe in a statement that his office intends to pursue a rehearing on the case. Wark stressed that the study used in the ruling “is several years old … and may not reflect current police practices.”

“We all abhor racial profiling, but there is a real question as to whether the high court understood and interpreted the data correctly without hearing from the criminal justice experts who compiled and analyzed it,” he added.

Wark maintained that this decision would not affect any past cases.