Naked trespasser killed girlfriend, stuffed body in tool box before he was shot by homeowner 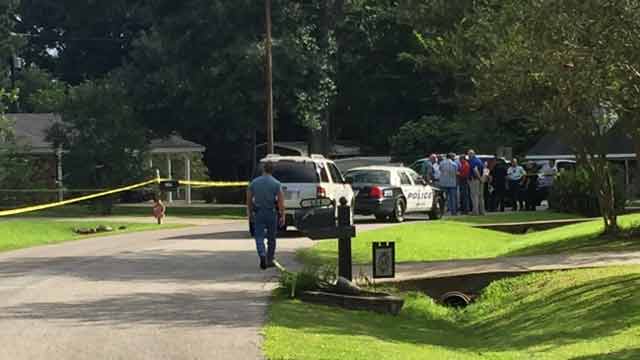 Authorities in Lafayette, Louisiana, have connected the deadly shooting of a naked trespasser last week with the body of a young woman found stuffed in a toolbox Tuesday.

The homeowner said he noticed the naked man in his backyard Friday around 4 p.m., but when he went to confront him, realized the trespasser was also armed with two guns. Police said when the naked man pulled the guns out of his shoes, aimed them at the homeowner and threatened him, the homeowner shot the trespasser. Witnesses told local media that they heard two to three gunshots, but authorities did not confirm whether both parties fired.

The trespasser died as a result of his injuries and was pronounced dead on the scene. He was later identified as 36-year-old Barrett Farabee II. Authorities did not indicate there were any connections between Farabee and the homeowner, who was uninjured during the incident, nor did they give a reason believed for Farabee being in the man’s back yard.

Then on Tuesday afternoon, authorities received a tip about a possible body. Soon thereafter, Lafayette Police and Lafayette Parish Sheriff’s Deputies discovered a deceased female whose body had been stuffed into a medium-sized tool box.

Authorities have not released a cause of death, but the woman was identified as 23-year-old Alannah L. Montalvo, who was in a relationship with Farabee. Forensic evidence gathered at the scene as well as statements obtained by investigators indicated that Farabee was responsible for Montalvo’s death.

No further details were released about the circumstances surrounding either incident, but anyone with possible information about Montalvo’s death is asked to contact Lafayette Police or Crime Stoppers at 232-TIPS.