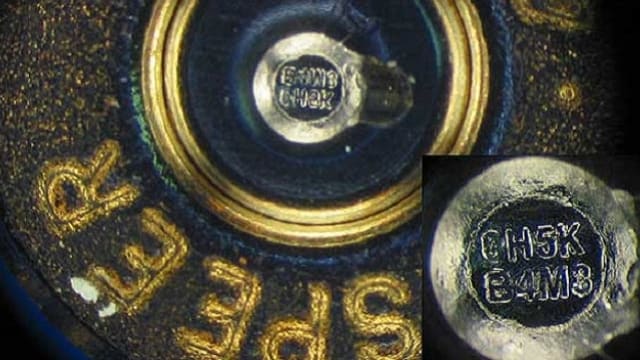 Gun rights and firearms industry groups, argue microstamping is unreliable, serves no safety purpose and is cost prohibitive, but some in New Jersey’s legislature want it anyway. (Photo: ucdavis.edu)

Bills banning the sale of toy guns, requiring seizure of real ones, establishing a handgun database and requiring newly manufactured handguns to be microstamped are up for debate this week in New Jersey.

The three bills, heard in the Democrat-controlled Assembly Law and Public Safety Committee on Thursday afternoon, take aim at the Garden State’s firearm laws from a number of angles.

The most novel of the three, A-3934, would take the two-fold step of requiring all new handguns sold in the state to have the make, model, and serial number of the gun etched or printed on internal parts that would be transferred to a cartridge when fired. Then keep a database of all such guns as well. Violations of the bill as written would carry up to 18 months in prison.

Such microstamping laws have been attempted in other states, such as California, without success and have only resulted in gun makers refusing to market new guns in mandated areas.

The sponsor of the legislation, Assemblywoman Joann Downey, feels adopting such a program would help police.

Senate Majority Leader Loretta Weinberg has introduced a companion version of the legislation in that chamber.

“In the wake of the recent terror attacks, lawmakers should be taking steps to empower citizens instead of trying to limit their rights,” Scott Bach, the executive director of the Association of New Jersey Rifle and Pistol Clubs, told Guns.com in an email.

“At its heart, microstamping is just another excuse to ban pre-existing handguns,” Bach said. “It is an unreliable technology that is easily defeated by criminals and makes no one safer.  The underlying premise that criminals use registered guns that would be detected by microstamping is delusional.”

In a test conducted by the University of California, Davis, only 20 percent of casings recovered from microstamped firearms were legible. Furthermore, it has been acknowledged that the parts inside the gun responsible for producing the stamps could be defaced or replaced with ease.

Bans on toy guns and concerns on due process

Next up is A.2938, a measure introduced in February but has seen little action until this week. Sponsored by Assemblywoman Patricia Egan Jones, the bill would require firearms seizure when a mental health professional determines a patient poses a threat.

Bach’s group, as well as the National Rifle Association, feel it is a due process nightmare, allowing the state’s current adjudication process to be bypassed, and could allow for “unjustified surrender of both personal property and constitutional rights.”

Finally, Assemblywoman Sheila Oliver’s A.1119 would ban the sale of toy guns that look too much like real ones by mandating they have to be made in colors other than black, blue, silver, or aluminum and contain a non-removable orange stripe at least one-inch wide that runs down the length of the barrel. This is over and beyond current federal regulations on marking imitation guns. Violators would be looking at a $500 fine for the first offense, and $1,000 for additional offenses.

Oliver said she introduced the measure in response to the death of 12-year-old Tamir Rice, killed by Cleveland Police who thought his airsoft pistol was both real and a threat.