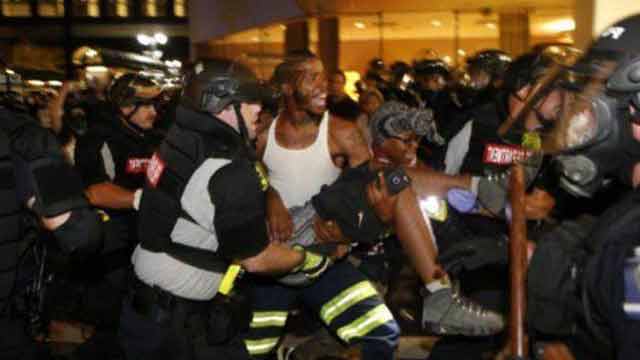 Officials confirmed that the gunshots that struck the protester weren’t fired by law enforcement. (Photo: AP)

Another violent night in Charlotte left four police officers injured and a demonstrator on life support after he was shot by a fellow demonstrator late Wednesday night.

What was supposed to be a peaceful prayer vigil for Keith Lamont Scott – whose fatal shooting by Charlotte police Tuesday is the epicenter of protests – quickly turned into another night of violent riots.

As riot gear-clad officers attempted to lead protesters away from the Omni hotel downtown, they were met with bottles being hurled through the air and clods of dirt being thrown at them. But the task at hand suddenly changed after gunshots rang out and demonstrators yelled for help from the police as a man lay on the ground bleeding profusely.

Video of the shooting can he seen here, but be forewarned, it is graphic.

Witnesses and law enforcement officers quickly rushed the injured man out of the chaotic scene. He was taken to a local hospital where, reports indicate, he remains on life support in critical condition as of late Wednesday night.

The City of Charlotte confirmed the gunshots that injured the man were not fired by the police.

Four police officers were also injured Wednesday night, but none of their injuries were believed to be life-threatening. Reporters and photographers covering the riots were also targeted for violence. In fact, angry rioters attempted to set a photographer on fire by placing the man – who was already unconscious at the time – into a trash can which had already been lit on fire. Twitter was afire with multiple instances of reporters being injured, and a reporter for CNN was knocked down by protesters on live TV.

Tuesday night rioters shut down an eight-lane interstate highway and took to breaking into tractor trailers trapped on the road and burning the contents they carried. Fires burned throughout the city and looters broke into a Walmart store.

“Just telling us this is still under investigation is not good enough for the windows of the Wal-Mart,” said John Barnett, who runs a civil rights group called True Healing Under God, or “THUG.”

Multiple vehicles – owned by both law enforcement and innocent bystanders – were destroyed. Throughout the night, a dozen officers were injured – including one who was struck in the face with a rock – and at least seven bystanders suffered injuries as well.

Meanwhile, North Carolina Gov. Pat McCrory declared a State of Emergency and called in the National Guard and Highway Patrol to assist local law enforcement Wednesday night. McCrory said that while he understands the concerns and frustrations, he refuses to respect acts of violence.

“We want peace,” he said. “We want conversation. And we want to support our police.”

Protests first erupted just hours after Scott was killed. Officers claimed while serving a warrant for another individual, Scott exited his vehicle with a gun in his hand and refused to comply to commands when he was shot multiple times.

Scott’s family, as well as several people claiming to be witnesses, said Scott was shot down in cold blood as he sat reading a book in his vehicle while waiting for his son to come home from school.

A woman identifying herself as Scott’s daughter posted an hour-long profanity-laced video on social media condemning the cops for their actions and what she perceived as the murder of her father. She said he was killed “for being black.” Scott’s brother also appeared on camera stating, “All white people are fucking devils. All white cops are fucking devils.”

The officer who shot Scott was identified as Brentley Vinson, who is black.

“It’s time to change the narrative,” said Charlotte-Mecklenburg Police Chief Kerr Putney Wednesday morning in reference to the deadly encounter with Scott, “because I can tell you from the facts that the story’s a little bit different as to how it’s been portrayed so far, especially through social media.”