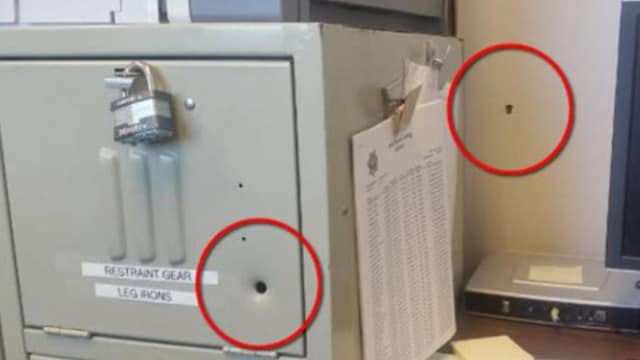 Some five months after an innocent equipment locker took a hit when a long-time deputy fired a Glock inside the Hall of Justice while trying to show another officer how to use it, Guns.com has found out he is still at work.

The strange locker slaying was previously reported back in April and involved unarmed bailiff Rhonda Gaines, a 20-plus year veteran, who brought a Glock to work but apparently wasn’t sure how to use it. Handing it over to Deputy Sotero Santos for a demonstration, Santos reportedly aimed the personal weapon at Gaines and fired it without meaning to– a negligent discharge.

Luckily for all involved other than the office equipment, the round zipped through a nearby locked cabinet marked “Restraint Gear, Leg Irons” and into the sheet rock wall behind it. At the time, department representatives said the matter was under investigation.

Checking back with the office as to the outcome, San Francisco Sheriff’s Department Chief of Staff Eileen Hirst told Guns.com this week the investigation is complete and under review, per standard department procedure. While any corrective action taken is confidential, Hirst confirmed Deputy Santo is still employed by the Sheriff’s Department.

When told of the news, gun rights advocates in the state were not surprised.

San Francisco county, which has a population of over 850,000, only has two active concealed carry permits and, though with a new sheriff in town replacing the scandal-plagued Ross Mirkarimi, the reluctance to issue permits to carry has not changed.

“Not only does the San Francisco Sheriff deny their residents fundamental, individual Second Amendment rights, the department appears to have serious deficiencies in the training of their officers,”  Calguns President Brandon Combs told Guns.com Thursday.

“The Sheriff would be wise to ensure that their officers are at least as competent and safe with firearms as the trained, law-abiding gun owners they refuse to allow to carry handguns for self-defense,” said Combs. “We look forward to investigating the Sheriff’s Department and reviewing their firearms training policies and records.”