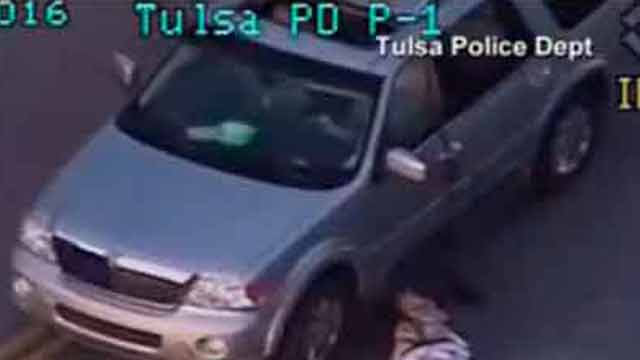 An enlarged still shot from video taken during the encounter that led to the officer-involved shooting death of a Tulsa man shows the man’s car windows were up, contrary to details originally provided by the officer who shot him.

Terence Crutcher was shot and killed Friday after Tulsa Officer Betty Shelby responded to a call about a vehicle that appeared to be abandoned in the middle of the road. Shelby encountered Crutcher when she arrived on the scene and, according to Shelby, Crutcher would not answer her questions and repeatedly refused to comply with commands. Shelby said Crutcher was acting erratically, was incoherent and appeared to be under the influence of what she suspected was PCP.

Shelby called for backup and as additional officers arrived on the scene, Crutcher continued to ignore commands and made his way back to his vehicle. While Crutcher initially had his hands up, once he got to his car, he dropped his hands.

According to Scott Wood, the attorney representing Shelby, fearing that he was reaching for a weapon, Shelby fired as Crutcher reached into his SUV through an open window.

While authorities did reveal that PCP was found in Crutcher’s car, the still shot clearly shows the window was not only up, but smeared with Crutcher’s blood. No weapon was found on Crutcher’s person or inside his vehicle.

Shelby has been placed on administrative leave, as is standard protocol. Tulsa Police Chief Chuck Jordan ensured the community that justice would be served. The incident is also being investigated separately by the Justice Department.