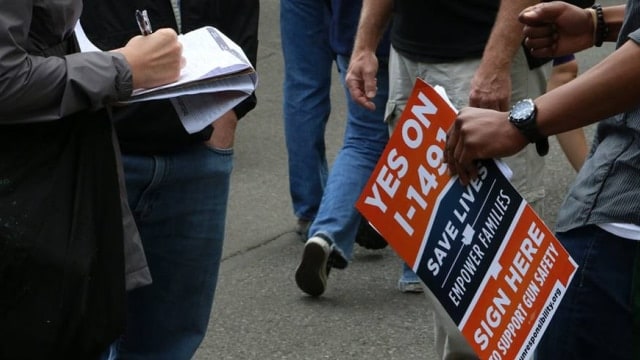 A ballot referendum that would allow for temporary gun seizures from those deemed at risk will be on the November ballot. (Photo: Alliance for Gun Responsibility)

Armed with a study from a gun control group, supporters of Washington’s I-1491 voter referendum argue that in states where similar measures were adopted lives were saved.

I-1491 would allow a family member to file a petition with the court for a judge to decide if a subject poses a threat to themselves or others. This could lead to an order prohibiting firearms possession for up to one year, and could be renewed annually. The subject of the order can request a hearing once a year to rescind the order while those filing false petitions would set themselves up for a criminal penalty.

The group behind the initiative, the Alliance for Gun Responsibility, has picked up $3.5 million in funding from gun control political action committees and wealthy donors. In 2014, the group helped pass a referendum expanding background checks in the state to include most gun transfers.

Thursday they unveiled a study that contends laws that quickly remove guns from individuals thought at risk — such as one adopted in Connecticut in 1999 — can help curb suicides.

Past studies by the EFSGV have been used to push for increased gun surrender mandates and policies in domestic violence situations.

“Much like a seatbelt reduces injuries in a crash, temporarily removing guns from a crisis situation reduces the likelihood of death or injury,” said Horwitz in a statement emailed to Guns.com. “Evidence supports Washington’s Extreme Risk Protection Order Initiative as an effective tool to remove guns before a situation turns deadly.”

In the report, researchers found that of the 762 risk-warrants issued in Connecticut between 1999-2013, almost all — 99 percent — had firearms. However, even though an average of seven guns were removed in each of those cases, 21 of the individuals went on to die by suicide, a rate approximately 40 times higher than the average annualized suicide rate in the adult population in Connecticut during the same period. Of the 21, six accomplished self-termination using a gun despite the risk warrant seizure.

While most risk-warrant subjects were not known to the public behavioral health system at the time the warrant was served, about a third later went on to receive treatment from the state, though the study cautions it is likely that additional subjects sought private mental health treatment.

The study’s authors contend that the data reflects one life saved for every 20 risk-warrants issued in Connecticut during the research period. They argue that in Washington, where the suicide rate is 14 percent higher than the national average, it could be more effective.

The Seattle Times endorsed I-1491 in an editorial this week saying current laws “set too high a bar for immediate action when people are trying to save someone who is suicidal or stop someone who has made violent threats against friends or family members.”

Still, gun rights advocates are not buying it and argue the move falls short constitutionally.

“The goal is great but the Initiative lacks real due process protection,” Alan Gottlieb, executive director of the Second Amendment Foundation, told Guns.com Thursday. “It is a feel good measure that will not accomplish the goal unless that goal is to disenfranchise people from their Second Amendment rights.”