Court reverses conviction of felon who was hunting with replica antique 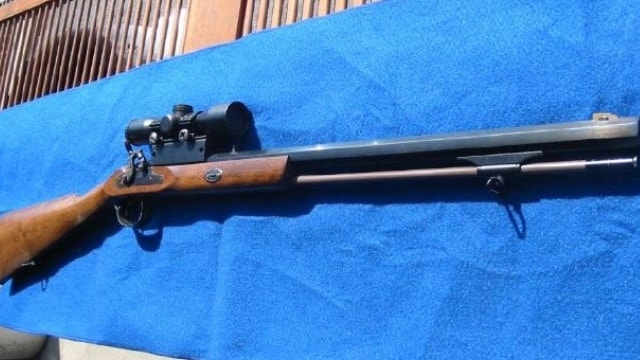 Prosecutors argued for four years that the scope Christopher Weeks added to his Traditions .50 cal percussion muzzle loader, similar to the one seen here, made it a modern firearm under state law. (Photo: Armslist)

The Florida Supreme Court in a 5-2 ruling overturned the conviction of a man for being a felon in possession of a firearm because the gun he was using wasn’t considered modern under state law.

The case involves Christopher Weeks who was charged for being a felon in possession of a firearm on Feb. 4, 2012, after a Florida Fish and Game Wildlife officer stopped him on state land during primitive weapon season for deer hunting. Weeks had been hunting with a Traditions .50-caliber muzzleloader equipped with a scope, a gun he received as a Christmas present after researching guns a felon could possess.

State law defines an antique firearm as any gun that used a “matchlock, flintlock, percussion cap, or similar early type of ignition system or replica thereof” or was made before 1918. Yet, authorities argued the scope modernized the gun.

Facing a jury trial, Weeks pleaded no contest and received three years probation. However, a 2013 District Court reversed that ruling on appeal, citing state law was unconstitutionally vague and, even though Weeks had added a scope to the muzzleloader, the addition was not enough to make the black powder percussion gun a modern firearm. State prosecutors took the position that Weeks’ firearm was not an exact copy of a weapon manufactured before 1918 — due to the scope — and his conviction should stand.

This week, the Supreme Court in a 5-2 split agreed with Weeks’ argument and held state law emphasizes the ignition system as the distinctive feature of an “antique firearm,” and that the hunter’s replica “used a type of firing system specifically mentioned” as exempt in the law’s language in an opinion written by Justice Barbara Pariente. Justices James E.C. Perry, Jorge Labarga and Ricky Polston concurred.

Justice Charles Canady, in a separate concurrence, blasted the State’s line of reasoning that adding a scope to Weeks’ replica made it a modern firearm, arguing that in the same logic “an antique replica with any modern accessory attached, such as camouflage tape, a rubber recoil pad, or a nylon rifle sling, would—unlike a similarly configured actual antique—fall outside the definition of an ‘antique firearm’ whether the accessory is permanently secured or temporarily affixed.”

Justice R. Fred Lewis broke with the majority and joined with Justice Peggy Quince in a dissent based on the technology involved.

“Although the firearm may have relied upon an ignition mechanism used by similar firearms before 1918, it also featured a scope that was not found on weapons that were available in 1918,” wrote Lewis. “In my view, such a firearm cannot constitute an antique firearm as defined by Florida law.”

Lewis, however, was factually incorrect in his assertion. Brass-tubed telescopic rifle sights from Morgan James and others were available prior to the Civil War while both Stevens Arms and Winchester introduced commercial lines of rifle scopes in 1902 and 1909, respectively, and sold them via mail order — meaning either could have been in common use in Florida well before 1918.