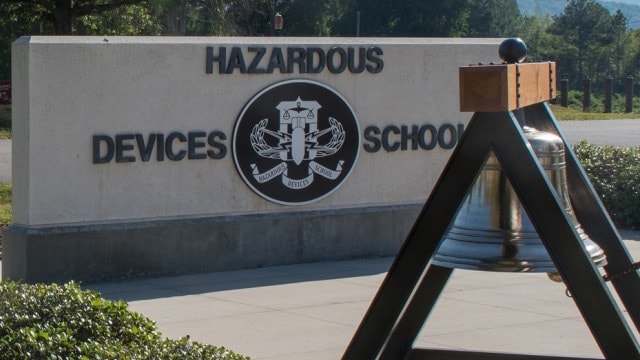 The HDS, since 1971 managed by the U.S. Army Ordnance Munitions and Electronic Maintenance School, is now an FBI-run institution. (Photo: FBI)

The Federal Bureau of Investigation this week assumed responsibility for the Hazardous Devices School (HDS) at Redstone Arsenal in Huntsville, Alabama from the Army.

The 400-acre facility dates back to 1971 and over the past 45-years has trained and certified more than 20,000 police and public safety bomb technicians as the country’s sole source school of its kind for non-military explosive ordnance disposal (EOD) technicians. The FBI has long partnered with the Army in training, and pushing out standardized equipment to each of the 467 public bomb squads in the field.

“The threat from terrorists and other criminals is ever changing,” said the school’s director, Special Agent Jeff Warren, in a statement. “We have to provide the very best training available,” he said. “This is a no-fail mission.”

FBI Deputy Director Andrew McCabe, on hand for the transfer ceremony, pointed out that HDS-trained bomb techs helped respond to and disable terror devices in New York and New Jersey earlier this week.

The school trains about 200 new bomb techs each year in six-week classes and recertifies the 3,100 current public safety bomb techs every three years.