Home surveillance video captured armed men storming an Atlanta home and the same men retreat as the armed woman chases them out.

Gwinnett County Police Department released video showing three men kick in the front door, search the house and then run back out the door as the woman open fires. On the phone and pointing her pistol, she chases them out and dodges gunfire.

Gwinnett Police said the woman killed one of the suspects during the shootout, but the two others fled the scene and are still at large. They released the video with the hopes that the public could help identify them.

The first suspect is described as a six-foot-tall black male with facial hair. He was wearing a white baseball cap, dark colored pants, and dark colored athletic shoes with reflective symbol.

The second suspected is described as a six-foot-tall black male with a thin build, short BLK hair and facial hair. He was wearing a hooded sweatshirt, dark colored pants, and black athletic shoes.

The third suspect, who was injured at the scene, was identified him as Antonio Leeks, 28, of Atlanta. When police arrived, they performed CPR, but were unsuccessful. 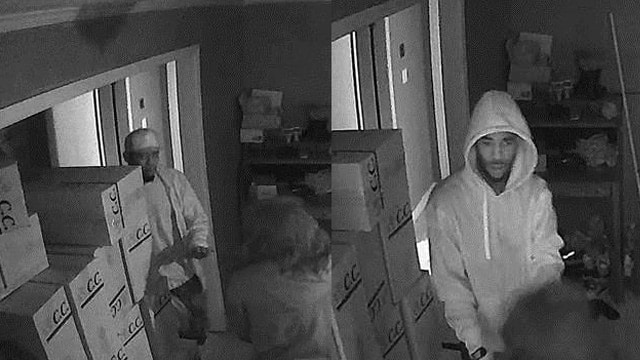 The woman, identified only as Asian and owner of a business in the restaurant and seafood industry, was staying at the home because it was close to her business. A male was also at the home, but he was sleeping in a different bedroom. They are not dating or married, police said.

Police warn that the two men should be considered armed and dangerous and a threat to the community. If you know them or see either suspect contact police immediately.

If anyone has any information to share in this case, please contact GCPD detectives at 770-513-5300. To remain anonymous, tipsters should contact Crime Stoppers at 404-577-TIPS (8477), visit the Crime Stoppers website, or text “Crimes” to 274637. There’s a $2,000 reward for information leading to an arrest and indictment in this case.