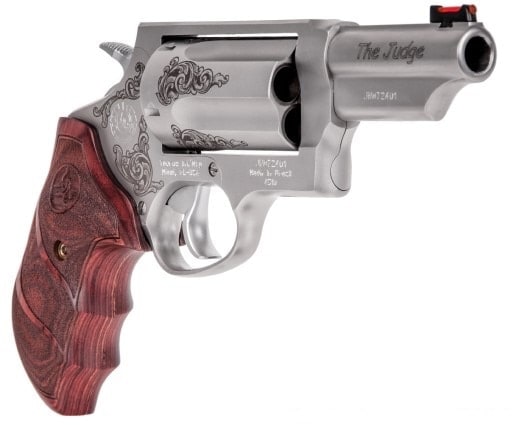 Bidding on the 10th Anniversary Judge will run until Oct. 2 with all proceeds benefiting the NRA-ILA. (Photo: Gunbroker)

Brazilian gun maker, Taurus, furnished one of its limited run 10th Anniversary Judge revolvers for auction on Gunbroker with all proceeds benefiting the National Rifle Association’s Institute for Legislative Action.

The gun, an engraved stainless steel and rosewood design was created to celebrate one of Taurus’ most popular handguns, the Judge.

Chambered to accept both .45 Colt and .410, this wheel gun has a five round capacity. As a double/single action revolver, the Judge is 5.4 inches long with a 3 inch barrel. Standing just over 5 inches tall, the Judge tips the scales at 29 ounces.  Complete with a red, fixed fiber optic on the front sight, the Judge comes with transfer bar and the Taurus Security System for added safety.

Its name comes from the substantial amount of judges who supposedly carry the wheel gun under their robes while presiding in the courtroom.

Chris Cox, U.S. Executive Director of NRA-ILA, said the lobbying group is delighted to have Taurus on board and appreciates the gun maker’s contribution to the fight for gun rights.

“On behalf of the five million members of the NRA, we thank Taurus for including us in the celebration of this special anniversary,” Cox said in a statement. “The stakes in this election could not be higher for America’s law-abiding gun owners, so Taurus’ support of NRA-ILA is extremely appreciated.”

Judge hopefuls will have until Oct. 2 at 10 p.m. eastern time to vie for the opportunity to bring the 10th Anniversary pistol home. At the time of this writing, the bidding was at $905.

Per Gunbroker rules, winners have to use a licensed FFL to transfer firearms purchased on the site. Sales tax also applies for applicable states.