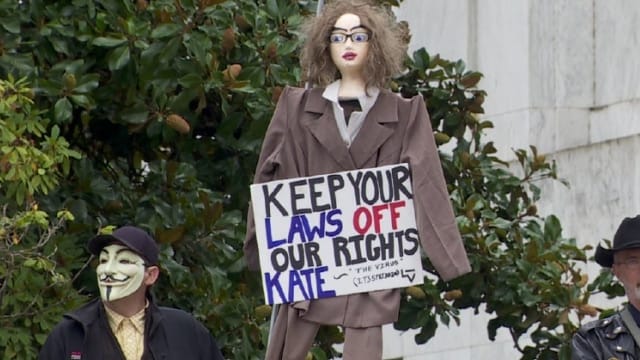 Oregon State Rep. Bill Post, a Republican in favor of gun reform, said the act did not help the cause. (Photo: KAVU)

Oregon Gov. Kate Brown, lacking the mandate of an election win for her current post, is not well liked by some in the state’s Second Amendment community.

Brown, the former secretary of state, came to office without taking part in the traditional electoral process, succeeding Gov. John Kitzhaber upon his resignation following a corruption scandal last February. Since in the Governor’s seat, she has been a very strong supporter of gun control, embracing a controversial bill backed by Michael Bloomberg to expand background checks to virtually all gun transfers that she signed into law last year.

Now, just two months after directing the state police to track and analyze gun transactions, while urging Congress to ban assault weapons and enact no fly/no buy legislation, Brown has picked up a $250,000 donation from Bloomberg for her campaign.

Running for election in November, Brown became the subject of an effigy which, as reported by KAVU and Oregon Live, was hung and later burn as part of a demonstration by pro-gun activists on the steps of the Oregon Capitol on Friday.

The act was denounced by not only Brown but also Republican lawmakers who stressed, “THIS DOES NOT HELP OUR CAUSE!!!”

Gun control groups were not amused, with Moms Demand Action sharing the story nationally through social media, saying, “Americans cannot sit on the sidelines and allow extremist fringe groups to dictate our nation’s gun laws. As long as gun violence threatens our children, families and communities, we must all stand up and speak out against this irresponsible and dangerous behavior.”