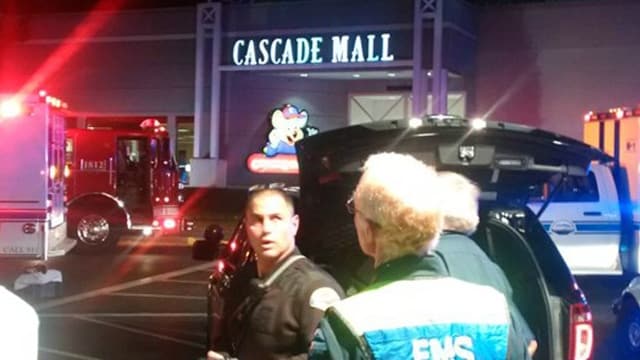 More than 26 local and regional law enforcement offices responded to the call on Sept. 24, 2016, at the Cascade Mall in Burlington, Washington. At one point approximately 200 officers were at the scene. (Photo: K5-NBC)

All five victims killed in the shooting at the Cascade Mall in Burlington, Washington, over the weekend have been identified and the man accused is in a custody.

Four women and one man were killed Friday night when 20-year-old Arcan Cetin, a Turkish immigrant, went on a shooting spree with a rifle at the mall’s Macy’s department store, according to the Skagit County Department of Emergency Management.

Local media identified the victims as Sarai Lara, 16; Belinda Galde, 64; Beatrice Dotson, 95; Shayla Martin, 52; and Chuck Eagan. The women were all pronounced dead at the scene, but Eagan died later at a nearby hospital.

Authorities said officers responded to calls about an active shooter inside the store around 7 o’clock Friday night in the city located about 65 miles north of Seattle. More than 26 local and regional law enforcement offices responded to the call, with at one point approximately 200 law enforcement officers at the scene. It took nearly nine-and-a-half hours to completely clear the 434,000-square-foot mall.

Investigators said Cetin walked through the store, opened fire and then walked out, leaving his weapon behind. They described surveillance video showing Cetin entering the mall empty-handed, but 10-minutes later walking around carrying a rifle. It’s unknown at this time if the weapon was hidden somewhere inside the mall or he went to retrieve it elsewhere.

In that short time, the shooter killed Lara after she split up from her mom to peruse the department store; Galde, a probation officer from Arlington, who was shopping with her mother, Dotson; Eagan who had just wrapped up a dinner date with his wife with a trip to the makeup counter; and Martin, who was a make-up artist working at the store.

Authorities said they have no reason to believe the shooting was related to terrorism. Sgt. Mark Francis, spokesman with the Washington State Patrol, said Cetin’s former girlfriend worked as an employee at Macy’s, although they have not confirmed that it was the Cascade Mall location where the shooting took place. Otherwise, Francis said there appeared to be no known connections between Cetin and the victims.

Authorities think Cetin, a Turkish-born immigrant who is a legal permanent resident of the U.S., acted alone. The apprehended him without incident Saturday night as he walked down the street near his home in Oak Harbor, some 30 miles from the mall.

“He said nothing,” said Lt. Mike Hawley of the Island County Sheriff’s Office, adding Cetin simply froze, complied with officers’ commands, and remained “calm and collected” as he was arrested.

Cetin is facing five counts of first-degree murder and being held without bond, according to the Skagit County Corrections jail roster. He is due to be arraigned Monday.