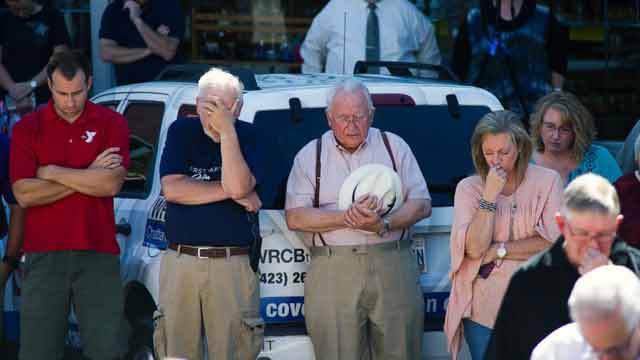 Authorities in Athens, Tennessee, are investigating a workplace shooting at a factory Thursday afternoon that left three people dead, including the gunman.

The incident unfolded just after 4 p.m. and the shooter was identified as Ricky Swafford, a more than 15-year employee at Thomas & Betts, a company that makes electrical components for a varied market.

According to a news release Tennessee Bureau of Investigation, Swafford had an unplanned meeting with two of his supervisors, during which time he became agitated. Swafford left the meeting “abruptly,” then returned a short time later with a handgun and fatally shot the two supervisors. The victims were identified as James Zotter, 44, and Sandra Cooley, 68.

Swafford then walked through the plant, still armed, as fellow employees took cover. Swafford made his way to a restroom in the building where responding officers discovered him dead from an apparent self-inflicted gunshot wound. No one else was injured during the incident.

As the investigation continues, the plant will remain closed for as long as needed “during this time of grief,” the company confirmed. The company will continue to pay their employees during that time.

“Yesterday, we lost colleagues in a senseless act of violence. We have absolutely no understanding of what motivated the perpetrator,” said Thomas & Betts manager Pat Joyce, according to reports. “We employ hard-working, talented, incredible, gifted people. We mourn as a community and as a community of co-workers.”

TBI spokeswoman Susan Niland confirmed Swafford had a state-issued permit to carry a concealed weapon and had no prior criminal history. Niland would not say whether Swafford was carrying the handgun prior to the shooting or retrieved it after leaving the meeting. She did, however, confirm that there does not appear to be any evidence pointing to a planned attack.