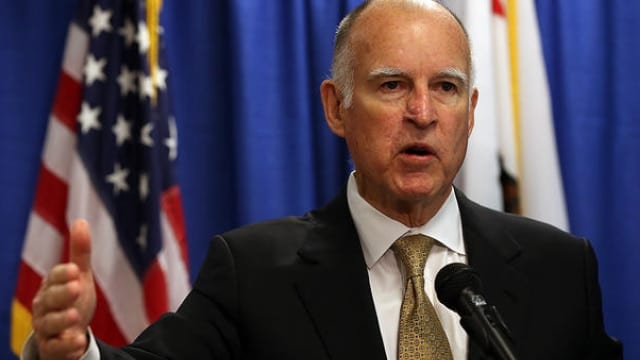 The bills are over and above a package pushed through the California Legislature earlier this year.

Brown rejected AB 450, introduced in June by state Assemblyman Kevin McCarty, D-Sacramento, which removed caps on the cost that police chiefs and sheriffs can charge for concealed carry permits. McCarty said the bill was needed as “A CCW permit is a privilege and should only be given to those who have a genuine need to carry a concealed firearm,” while gun rights advocates argued it would make the state’s already hard to get permits impossible as they could be priced unrealistically high.

In his veto message to lawmakers Brown pointed out the bill was spurred by a local dispute in one county (McCarty’s) and “I am unaware of a larger problem that merits a statewide change at this time.”

Gun rights advocates, who flooded the governor’s office with calls, welcomed the news.

“Governor Brown prudently saw AB 450 for what it was: a political hit on a good sheriff by a petty legislator who wanted to use cost increases as a way to deny law-abiding people’s Second Amendment civil rights. Hopefully, Brown’s veto will be the end of it,” Brandon Combs, president of the Firearms Policy Coalition, told Guns.com Monday.

Also scuttled by Brown was SB 1332 by Sen. Tony Mendoza, D-Artesia, which would have modified gun registration forms so that both spouses or domestic partners could register as the owner while complicating laws on the loan and possession of firearms. Gun rights advocates warned it would lead to a raid on DROS funds paid to register firearms without affecting crime.

Brown agreed, saying in his veto the bill would create “millions of dollars in new and ongoing costs for the Department of Justice” and that he did not feel “that this additional burden and cost comes with a commensurate public safety benefit.”

Police must lock up guns, but can continue to buy off-register

The legislation, SB 869 by Sen. Jerry Hill, D-San Mateo, removes current protections under state law that allows peace officers — including federal law enforcement officers, officers from other states in California on business and retired peace officers who are authorized to carry firearms — from the same regulations that require guns to be secured in vehicles when not in use under threat of a $1,000 fine. Hill introduced the measure following the deaths of Kathryn Steinle on San Francisco’s Pier 14 last July and muralist Antonio Ramos in Oakland — both killed with guns stolen from the cars of federal agents.

An investigation by The OC Register published this week found that at least 329 police firearms were reported lost or stolen from Southern California law enforcement agencies during the past five years.

“Senate Bill 869 closes a loophole so law enforcement officers — just like every other gun owner — must safely and securely store their handguns when leaving them in a car,” Hill said Monday.

Police will be granted an exemption to purchase firearms not on California’s safe handgun roster under AB 2165 proffered by Assemblymember Rob Bonta, D-Alameda. The shrinking roster of pistols and revolvers approved to sell to the public continues to decline at a steady rate as no new guns are added due to microstamping requirements and older guns are removed. Gun rights groups opposed the measure.

Brown took action on a fifth firearms bill, signing AB 2510 by Assemblymember Eric F. Linder, R-Corona, which will require the Attorney General to develop a uniform concealed carry license for use across the state. The standardized format will be approved with input from the California State Sheriffs’ Association and California Police Chiefs Association.