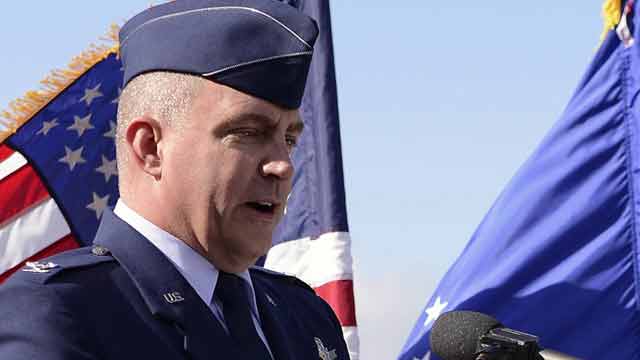 Col. Eugene Caughey, who was found dead in his home Sunday, speaks at the Schriever Air Force Base during a 9/11 commemoration in 2014. (Photo: Christopher DeWitt/Air Force)

Police were dispatched to the home of Col. Eugene Caughey, 46, following a call about a suspected suicide. Few details, including the believed cause of death, have been released by authorities, but an autopsy is set to be performed and will determine the exact cause of death. Autopsy results could take up to six weeks. However, Sgt. Tim Stankey, spokesman for the Colorado Springs Police Department, which is conducting the investigation, told Miltary.com that foul play is not suspected.

Caughey was accused of rape, in which he forcefully held the victim against her will while performing sexual acts. He is also accused of taking photographs of his genitals while in uniform. Additionally, Caughey was under fire after he was caught with an unregistered firearm at an on-base residence, was charged with assault, at least half a dozen counts of adultery, and other accusations which the Air Force described in a statement as “conduct unbecoming an officer and gentleman.” The charges stem from instances that occurred as far back as 2013.

Caughey’s court-martial was originally scheduled to start in August, but a continuance pushed the date to next month. He was formally charged with rape and assault, along with a dozen other charges, in December.

At the time of his death, Caughey was assigned to the Air Force Space Command staff at Peterson Air Force Base in Colorado. He was formerly a 50th Space Wing vice commander at Schriever Air Force Base, but was removed from that position last June, at the onslaught of the investigation.

Caughey was a 23-year veteran who survived the September 11 terrorist attack at the Pentagon, during which time he was a Captain.

“I think this surprised everybody,” said Caughey’s attorney, Ryan Coward. “This is just a very tragic event that occurred for him and his family.”

Coward said Caughey was looking forward to having his time in court and had been actively participating in his defense. If convicted, Caughey could have faced up to life in prison on the rape charge alone.