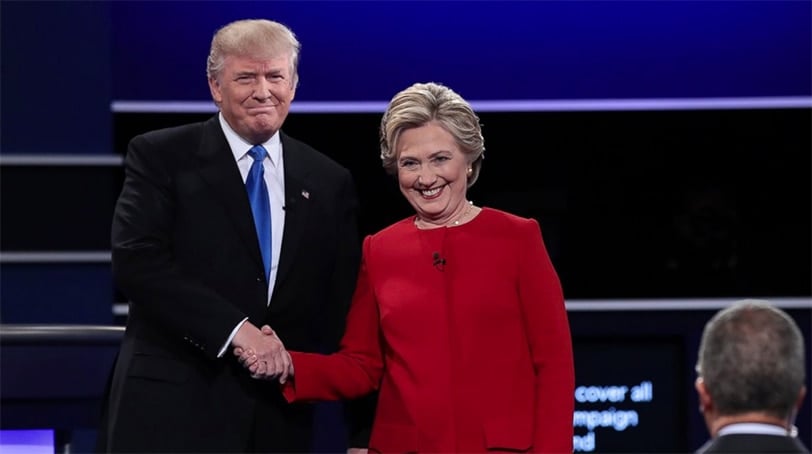 Presidential candidates Donald Trump and Hillary Clinton shake hands as they take the stage of the first of three presidential debates scheduled before the November election. (Photo: Getty Images)

The topic of guns was broached during Monday night’s presidential debate and gun control group Everytown for Gun Safety weighed in to “correct the record” on some of Republican candidate Donald Trump’s statements to that effect.

Chief among those items was the idea that Trump is somehow getting credit in his support of closing the so-called “Terror Gap,” a loophole that allows those with suspected terrorist ties to purchase guns.

“While he acknowledges the risk in leaving the terror gap open (and he has done that before, after San Bernardino), he is still holding hands with the extremist leadership of the NRA (biggest endorser, $15M in ads) that continues to block the best solutions we have to keep guns out of prohibited purchasers/people who shouldn’t have them — background checks on all gun sales, closing the terror gap — and has pledged to advance the NRA’s extremist agenda to put guns everywhere, for anyone, with no questions asked,” said Erika Soto Lamb, chief communications officer for Everytown, in an email to Guns.com Tuesday.

Trump said he agreed with his opponent, former Secretary of State Hillary Clinton, when she said people on a terror watch list or a no-fly list should be kept from being able to purchase guns.

Everytown criticized Trump’s support of closing the terror gap, saying it comes in the form of a bill sponsored by Republican Sen. John Cornyn that “sets an unworkably high bar for law enforcement and does not give them the tools required to keep guns out of the hands of terrorists,” Soto Lamb said. It’s a red herring bill designed to make it look like he and others support keeping guns out of the hands of terrorists but it would never work.”

The gun control group in July put out a report, “Closing the Terror Gap,” in which it claimed people on the terrorist watch lists legally purchased guns more than 2,000 times over the course of 11 years because the FBI was unable to block the transactions.

The report also claims 76 percent of gun owners – including 71 percent of NRA members – support blocking those sales to people on the lists with suspected terrorist ties.

In a statement posted on its Institute for Legislative Action website in November, the group said it does not want terrorists or dangerous people to have firearms and that “any suggestion otherwise is offensive and wrong.”

Related: Is the NRA right about the terror watch list?

“We all agree that terrorist and dangerous people should not have access to firearms, or any weapon,” said NRA spokeswoman Jennifer Baker, as reported by the Wall Street Journal. “The NRA’s concern is that we do not deny innocent Americans who are wrongly on these secret government blacklists their right to due process.”

“The problem with secret government watch lists is that they are full of non-criminals,” Pratt said. “No one should lose their rights, including those protected by the Second Amendment, without being convicted in a court of law.”