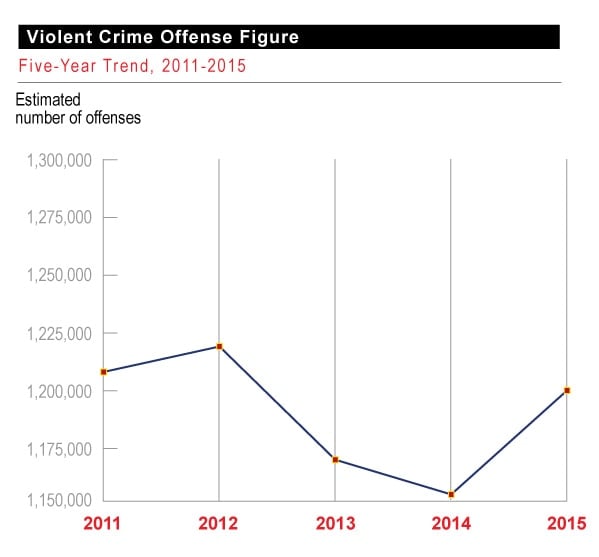 Despite a continued decrease in other crimes, the number of violent crimes increased 3.9 percent in 2015 and the murder rate rose by nearly 11 percent, according to data published Monday in the FBI’s Uniform Crime Report.

Using data provided by law enforcement agencies from across the country, the annual report shows an estimated 1.2 million violent crimes and happening at a rate of 3.1 percent.

Figures for property crimes went in the opposite direction dropping 2.6 percent and marking the 13th straight year the collective estimates for the offenses declined.

While the report shows an end to a two-year trend of violence crime decreasing, total violent crime is still lower from five and 10 years ago.

The FBI categorizes violent crime as murder and non-negligent manslaughter, rape, robbery, and aggravated assault. According to the data, there were an estimated 15,696 murders, an increase of 10.9 percent from 2014; 90,185 rapes; and 327,374 robberies nationwide. Then aggravated assaults accounted for 63.8 percent of all crimes reported to law enforcement.

The report shows firearms were used in 71.5 percent of the nation’s murders, 40.8 percent of robberies, and 24.2 percent of aggravated assaults.

Yet, it’s unclear what exactly drove the national increase in violent crime in 2015 as the data was published Monday and still requires a deeper and careful analysis.