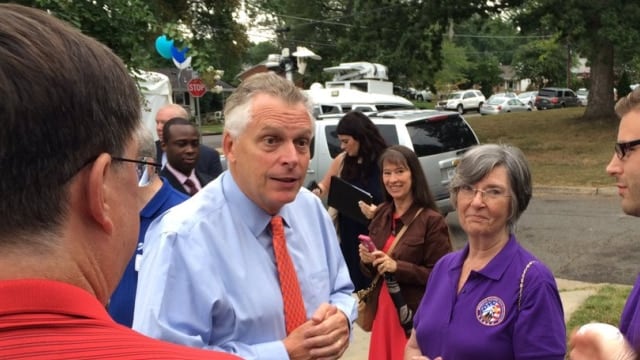 “These funds will assist the winning localities as they accept firearms that would often otherwise remain in homes where dangerous and volatile domestic violence situations are happening,” said Gov. McAuliffe (Photo: Governor’s Office)

Virginia Gov. Terry McAuliffe on Monday announced a series of grants to three sheriffs’ offices to be used to store guns surrendered by those subject to protective orders.

In February, McAuliffe worked a deal with state lawmakers that jettisoned a plan by Attorney General Mark Herring to no longer recognize concealed carry permits from 25 states over fears those licenses did not meet the same guidelines as Virginia. In exchange for increasing permit reciprocity, the Virginia State Police would send troopers to gun shows to provide voluntary background checks for private gun sales while gun owners with certain protective orders will have to hand over their firearms within 24 hours of being served and be prohibited from possessing firearms for the length of the order.

Under new law, those subject to surrender face a Class 6 felony for non-compliance. A Class 6 felony is punishable by up to five years imprisonment, a $2,500 fine and permanent loss of firearms rights.

The grants announced this week, paid for with federal funds, will go to sheriffs’ offices in Dinwiddie, Franklin and Wise counties to pay for future storage of firearms turned in.

“The historic and bipartisan gun safety package we passed this year will save lives by keeping guns out of the hands of domestic abusers,” said McAuliffe in a statement. “These funds will assist the winning localities as they accept firearms that would often otherwise remain in homes where dangerous and volatile domestic violence situations are happening.”

Dinwiddie County will receive $67,189 while Franklin and Wise will pick up $63,410 and $28,045 respectively. The funds will go toward establishing surrender policies and protocols and to purchase storage equipment.

“These funds will be used to better prepare our office to house firearms for individuals who have been placed under a Family Abuse Permanent Protective Order,” said Wise County Sheriff Ronald D. Oakes.

Gun rights advocates argue the money may be misplaced as law enforcement generally doesn’t have to get involved in such situations.

“Generally the police don’t want to be the temporary custodian of firearms during the time a permanent protective order is in effect (up to two years, and temporary protection orders do not take them away at all),” Philip Van Cleave, president of the Virginia Citizens Defense League told Guns.com. “If the guns in question can be turned over to a family member or friend for safekeeping during that time, that would be a better option, especially if the police decide unilaterally to hang onto those guns longer or if one has to overcome bureaucratic red tape to get them back.”

Also on Monday, the U.S. Department of Justice awarded $34.5 million through nine different programs to recipients including the Office of the Attorney General of Virginia. The funds will be used to “reduce crime, improve community safety and provide a science-based approach to criminal justice operations.”