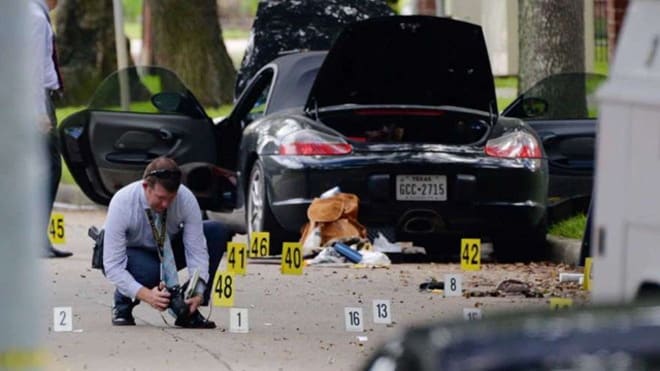 Gunman Nathan DeSai, a 46-year-old attorney, shot at passersby while standing outside his Porsche on the morning of Sept. 26, 2016. (Photo: The Houston Chronicle)

The Houston lawyer who shot nine commuters Monday morning wore a vintage military uniform with Nazi emblems as he shot at passersby, but authorities haven’t confirmed a motive.

Capt. Dwayne Ready, of the Houston Police Department’s Homicide division, described the scene during a press conference Tuesday, but withheld details about the suspect pending a medical examination and family notification.

According to Ready, the suspect opened fire outside a shopping center in a residential area before 6:30 a.m. Armed with a .45-caliber pistol, the gunman shot at drivers randomly.

Some victims continued driving to a safe location before stopping, but others weren’t so lucky. Injuries varied from debris in the eyes to something more severe and requiring emergency medical care. However, all nine victims survived their injuries.

Suburban and city police officers arrived on the scene around 6:30 a.m. Under fire, some helped victims to a safe location while others surrounded the gunman, who took cover behind a tree as he continued shooting at officers. The suspect died during the exchange of gunfire.

A preliminary investigation revealed the gunman had a semi-auto .45-caliber Tommy Gun in his car, 2,600 rounds of ammo and an sheathed blade on him in addition to the pistol he used to shoot at cars. Investigators also recovered at least 75 shell casings fired from both the gunman and police.

Besides the nine victims and damaged cars, Ready said investigators found damage to a house downrange.

Police uncovered more weapons after searching the gunman’s house and other military memorabilia including Nazi and Civil War items. During the press conference, it was confirmed that the gunman bought his guns legally and had a state-issued concealed carry permit.

While the case is still being investigated, Ready said they won’t speculate on motive. “A this point, we’re very open-minded in terms of the motive,” said Acting Houston Police Chief Martha Montalvo, who also appeared at the press conference.

However, because of the Nazi emblems, local authorities asked the FBI for help determine motive. Yet, the feds have already ruled out terrorism and dismissed linking the incident to any terrorist organizations.

Houston police confirmed that the shooter was a lawyer who presumably had issues with his law firm. Houston Mayor Sylvester Turner, who left the city Sunday to represent the city at an event in Cuba, identified the shooter Nathan DeSai.

According to local reports, DeSai, 46, specialized in criminal, business and family law. But a 12-year law partnership dissolved earlier this year, which may explain his motive.