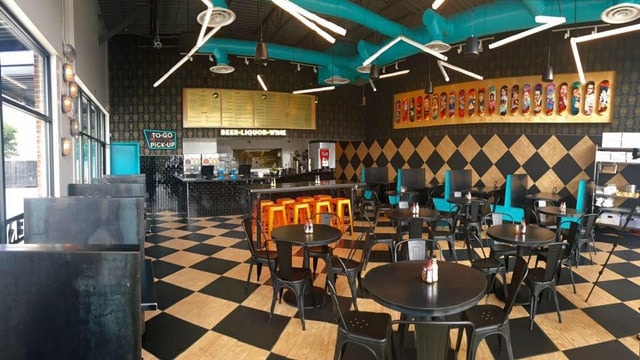 A Houston area pizza shop came under fire over the weekend for its policy banning guns inside the restaurant.

“I have no problem with gun owners, concealed or open,” he said during an interview with CW39. “I have a problem with any gun coming in an establishment that serves liquor. I don’t think there should be any guns there. That’s my decision.”

That decision, however, prompted some unintended consequences, according to published reports.

It all started when a would-be customer named Kyle Kelly publicly blasted the restaurant on a Facebook post after noticing signs describing the policy, saying “any business that removes my right to defend myself is a business that doesn’t want my money.”

Several local media outlets, including the Houston Press and Culture Map Houston, reported Ellis was behind the restaurant’s social media account, but Guns.com did not independently confirm this.

Texas3006.com, a group that serves as a centralized database of restaurants and other establishments in Texas with 30.06 and 30.07 signs posted, shared a screenshot Saturday of the heated conversation between the restaurant and Kelly on social media, urging the “pro-carry” community to take their money elsewhere.

In a statement on the restaurant’s Facebook page Sept.26, the restaurant described what happened next as “a social media conflict with a coalition of individuals from across the country that set out to sabotage our business by creating fake reviews and leaving false and disturbing comments on all of our social media outlets.”

The bad reviews forced Yelp to shut down the restaurant’s page for “an active clean up.”

“This business recently made waves in the news, which often means that people come to this page to post their views on the news,” Yelp website administrators wrote in a message posted to the restaurant’s listing. “While we don’t take a stand one way or the other when it comes to these news events, we do work to remove both positive and negative posts that appear to be motivated more by the news coverage itself than the reviewer’s personal consumer experience with the business.”

Texas3006, which defines itself not as a concealed carry or open carry advocacy group, provided a statement to Guns.com Wednesday further clarifying its intent in the wake of intensifying media coverage.

“In the nine-plus years that texas3006.com has been documenting businesses that post signage, I have never seen a business respond in quite the manner that Pi Pizza HTX did after a peaceful customer with a License to Carry reached out to them regarding their decision to post 30.06 and 30.07 signs,” the group writes. “This is why the community took such offense. I can imagine that being told to ‘F Off’, ‘Get a life’, and being called an ‘ignorant idiot,’ publicly by a business, is humiliating! Combine that with being attacked because of your self-defense beliefs, and I don’t think it’s difficult to see why so many people came to Kyle’s defense. The outrage was over Kyle’s treatment, not so much the signs at that point.”

The Pi Pizza HTX Facebook page thanked the restaurant’s “beloved customers and hospitality brethren” for trying to offset the bad reviews with positive ones, though the incident has toughened Ellis’s stance on the policy.

“As a matter of fact, now I think I’m going to put the signs up on my businesses that I don’t serve alcohol, because I don’t really care about these people,” he said during an interview with KHOU.com.

Editor’s Note: The article was updated at 6:51 EST to clarify Guns.com did not independently confirm whether Lee Ellis was posting for the Pi Pizza HTX Facebook account.