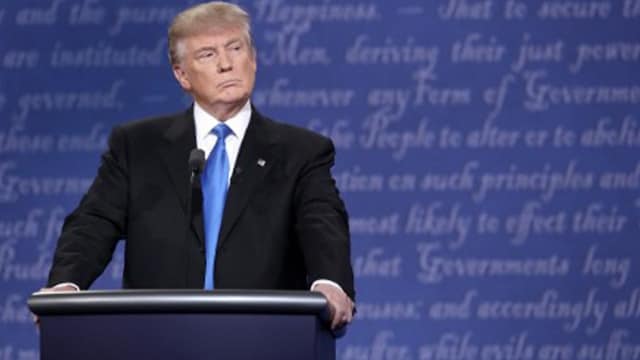 Donald Trump standing behind his lectern during Monday’s presidential debate against Hillary Clinton.

Donald Trump slightly misled the American public during Monday’s debate about the endorsement he received from the U.S. Immigration and Customs Enforcement agency.

“I was just endorsed by ICE. They’ve never endorsed anybody before on immigration,” he said. However, the agency did not endorse him because under federal law it can’t.

“Per the Hatch Act, federal agencies are prohibited from engaging in partisan political activity including the endorsement of any candidate for office,” ICE spokeswoman Sarah Rodriguez told The Daily Beast.

“U.S. Immigration and Customs Enforcement has not and will not endorse any candidate for office,” she said.

ICE and its nearly 20,000 employees fall under the much larger Department of Homeland Security, which is comprised of eight other agencies. ICE is responsible for enforcing immigration laws, customs laws like preventing the production of counterfeit consumer goods, and border protection.

But the endorsement wasn’t a complete fabrication. ICE’s workers union, the National ICE Council, endorsed Trump on Monday before the debate, details shared in a press release issued by the Trump campaign.

“The National Immigration and Customs Enforcement Council, the official union representing 5,000 federal immigration officers and law enforcement support staff made their first-ever endorsement of any candidate for any elected office,” the statement says.

Trump has made immigration, most notably building a wall along the border of Mexico, as a key issue in his campaign.