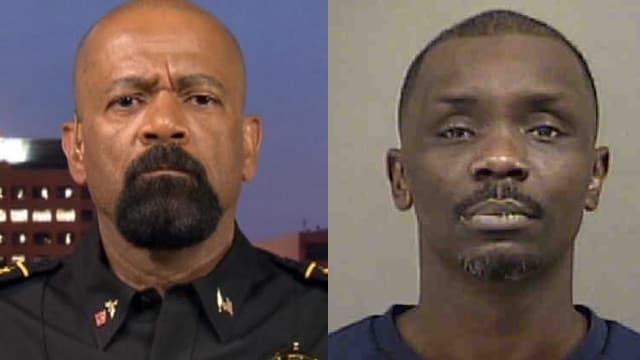 Milwaukee Sheriff David Clarke, left, and Preston Bluntson, the man who insulted him.

A Milwaukee man was arrested Saturday after berating Milwaukee County Sheriff David Clarke throughout a two-hour flight from Beer City to Charlotte, the Journal-Sentinel reported.

Preston Bluntson, 36, was charged with intoxication and disruptive behavior. During the flight, he repeatedly made loud and obnoxious comments toward the sheriff, who has become a prominent pro-gun spokesman for the NRA and Donald Trump supporter.

A passenger, who asked not to be identified, told the newspaper that Bluntson, who is African-American, repeatedly used a racial epithet, accused Clarke of “closing our parks” and said the sheriff is “not one of us.”

Other passengers tried to engage Bluntson, who had been drinking throughout the flight, by calming him down, but were unsuccessful. When the plane landed, Clarke was holding Bluntson down and Charlotte police arrested him, the newspaper reported.

Clarke’s office issued a statement on the incident, sharing the sheriff’s perspective.

Clarke directed the flight attendant to radio airport police to be standing by on arrival. The man continued his obnoxious behavior and on approach to landing he got out of his seat. The flight attendant told him to return to his seat and he continued to be loud and profane. While the plane taxied to the gate he began taunting the Sheriff, asking him what he was going to do about it. Several times during the flight he yelled to everyone that Sheriff Clarke was on the plane.

Sheriff Clarke again got out of his seat and approached the obnoxious passenger who tried to get up. Clarke ordered him to sit down and when he refused, Clarke shoved the unruly passenger face down and pinned him against the seat and held him there until the flight arrived at the gate. The sheriff watched the rest of the cabin, concerned that this may be a distraction for something else.

A police officer boarded the flight and the Sheriff asked for her handcuffs and pulled both arms behind the suspect’s back and handcuffed him. The airport police took hold of the suspect and escorted him off the plane. Other officers were on hand and this obnoxious passenger began yelling at the officers at the gate where numerous passengers were waiting to board.

Clarke said he thinks Bluntson should be charged with a federal crime and expressed disappointment that there was no U.S. Air Marshal on board the plane.