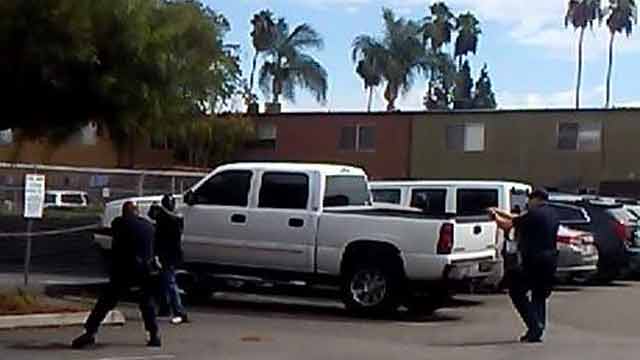 Video recorded by a witness shows Olango’s hands were not raised when he was shot, despite some claims saying otherwise. (Photo: El Cajon Police Department)

Hundreds of protesters took to the streets in El Cajon, California, after a man was shot and killed by police officers Tuesday afternoon.

Officers were dispatched to a shopping center just after 2 p.m. after the department received calls about a man who was “not acting like himself.” The man was reportedly walking in and out of traffic, posing a danger to both himself and motorists. At least one of the calls came in from the man’s sister, who was concerned about his well-being.

Going on a description given by the caller, the first officer on the scene found the man behind a restaurant. According to a press release from the El Cajon Police Department, the man, later identified as Alfred Okwera Olango, 38, was acting erratically and repeatedly refused to follow the officer’s instructions.

Olango reportedly placed his hands inside his pockets where they could not be seen by the officer, despite repeated warnings not to do so. After failing to remove his hands from his pockets, the officer trained his service pistol on Olango and called for backup, as he continued to give instructions but Olango ignored them. When the second officer arrived on the scene, he prepared to use a taser on Olango, if needed. Alfred Okwera Olango was a 38-year-old refugee from Uganda who came to the United States at the age of 12. (Photo: Facebook)

Meanwhile, Olango began pacing back and forth as the officers attempted to talk with him. But at some point during the confrontation, Olango rapidly placed both hands into his front pockets, then withdrew his hands and placed them together, while assuming what authorities described as a “shooting stance.” At that time, the second officer deployed his taser, as the first officer simultaneously fired his service pistol multiple times, striking Olango.

The officers rendered first aid to Olango until paramedics arrived on the scene. He was transported to a local hospital, but despite efforts to save him, Olango died.

Authorities later learned that Olango was, in fact, unarmed, despite the stance he took suggesting otherwise. The object held in his hands was later confirmed by the El Cajon Police Department to be a vaping device.

As investigators worked the scene, a crowd formed, some of which participated in angry chants aimed at the officers. As media arrived on the scene, some who claimed to have witnessed the shooting gave a troubling account of events. Multiple people claimed Olango was gunned downed while his hands were in the air.

However, the department confirmed that Olango’s hands were not raised when he was shot. In fact, a lone witness recorded cellphone footage of the entire shooting, which she voluntarily – and without hesitation – handed over to investigators on the scene.

The department confirmed the video showed a very different account of what was portrayed by some claiming to be witnesses and the events leading up to the shooting were in line with what the responding officers previously described. Officials also shared a still shot from the video depicting what was previously described as Olango’s “shooting stance.”

Neither of the officers were equipped with body cams. In fact, the El Cajon City Council only recently authorized the purchase of body cams for the department, and although they have been ordered, the cameras have not yet been delivered.

Likewise, while the department does have a partnership with the Community Research Foundation to have a Psychiatric Emergency Response Team clinician respond to possible mental health-related calls alongside police officers, at the time of the call concerning Olango, the PERT clinician was with another officer on a different call and therefore unavailable.

The El Cajon Police Department ensured the public of a “complete and thorough” investigation surrounding the shooting. The two officers involved have been placed on administrative leave, as is standard protocol.