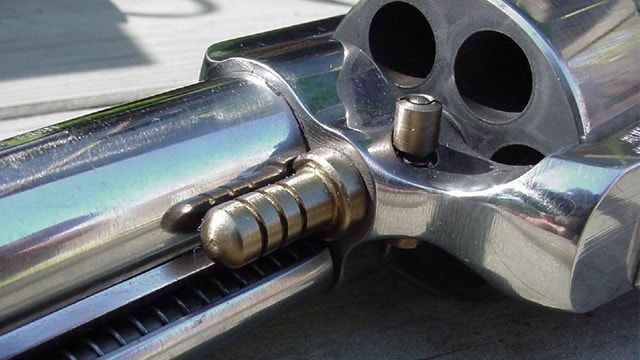 The cylinder of a Ruger Blackhawk revolver, which has been in production since the 1950s. (Photo: The Hobby Gunsmith)

Sturm, Ruger & Company has been named in a personal injury case for retaining a “firing mechanism design that was over 100 years old” over more improved designs that could have prevented an accidental discharge.

Shannon Wayne Garrison, of Morgan County, Alabama, filed the suit in a Birmingham federal court in September for compensatory and punitive damages because of an injury he suffered two years ago.

According to the complaint, Garrison was injured on Sept. 21, 2014, when his .41-caliber Ruger Blackhawk revolver accidentally hit the ground and discharged.

Leading up to the incident, Garrison was checking game cameras at a hunting club in nearby Winston County. At the time, he had on his hip a handgun that was un-cocked with the hammer in the full-down position and one round was in each of the six chambers.

While riding an All Terrain Vehicle on uneven and bumpy ground, a small bump “jarred the ATV causing the subject firearm to fall out of his holster,” the lawsuit says. When the gun hit the ground, it discharged and the bullet struck Garrison’s ankle.

After getting shot, Garrison fell off the ATV and onto the ground. He tried to call 911 on his cell phone, but could not find signal. He managed to climb back on to his ATV and return to his truck. He then drove a few miles out to a nearby residence where he called 911. A short time later, emergency personnel responded and Garrison was airlifted to a hospital in Huntsville.

The lawsuit says the bullet traveled through his calf, hamstring, groin, stomach and midsection before stopping just inches away from his heart, where it remains lodged. As a result of his injuries, he needed multiple surgeries and extensive medical treatment. He’s also developed painful medical complications and emotional stress.

The lawsuit alleges Ruger retained dated technology for the Blackhawk design instead of updating it with a modern firing mechanism that would have prevented the gun from discharging if dropped.

According to Ruger’s safety and recall announcements on its website, the company is offering to modify certain models of Blackhawk revolvers to convert the operating mechanism as to prevent accidental discharges if the gun is dropped or hit. The announcements also suggest owners take basic safety precautions by keeping the hammer down on an empty chamber.