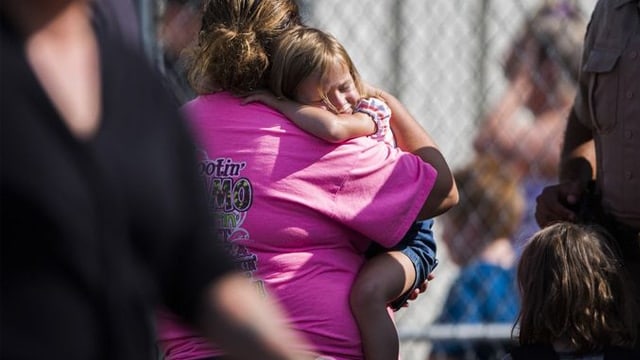 A child cries after being picked up by a caretaker at a Townville church following the shooting on Sept. 28, 2016. (Photo: Katie McLean/Independent Mail)

A 14-year-old boy is in police custody after he went on a violent shooting spree in Anderson County, South Carolina, first killing his dad before making his way to a nearby elementary school where he wounded a teacher and two Kindergarten students.

According to a statement by the Anderson County Sheriff’s Office, the teen drove to a fence at the Townville Elementary School around 2 p.m., stepped out of his truck and fired shots at a playground during recess until a volunteer firefighter tackled him.

The 30-year veteran with the Townville Volunteer Fire Department, Jamie Brock, held the teen until police arrived a few minutes later and took him into custody.

The three injured included a 6-year-old struck in the foot, a teacher shot in the shoulder, and another 6-year-old who was shot in the leg and listed in critical condition, local media reported.

About the same time the teen was apprehended, officers discovered the boy’s father, 47-year-old Jeffrey Osborne, shot to death inside his home. The teen is suspected in his father’s death as well.

According to local reports, the teen called his grandparents after leaving his house but before arriving at the school. On the phone, he was so upset that his grandparents could not understand what he was trying to say. Shortly after, they went to his home to check on him, but instead found Osborne’s body.

The Sheriff’s Office said the incident appears to be isolated and the suspect acted alone. The teen, who has not been identified, had no connections to either the teacher, students, or the school and in fact, had been homeschooled.

Authorities confirmed the suspect never entered the building, which does not have a school resource officer but is equipped with cameras and a security door system.

While authorities have not released a possible motive, as the investigation is ongoing, they have already ruled out racism and terrorism.

“These teachers and staff members love these children. And they put their lives on the line to protect them. And I just couldn’t be more proud. You know, they’ve been trained, but you never know if you’re faced with the incident if that training is gonna click. And you follow what you’re trained to do but they did,” Avery said.

Yet, parents expressed irritation that they weren’t notified about the shooting by the school district earlier, but said they understood the priority was to keep the students safe. Authorities responded to 911 calls at 2 p.m. and the school sent out a notification 39 minutes later, while dozens were already waiting to pick up their child, according to local media. Some heard about the shooting on the news before receiving the update.

Brock, who was unarmed when he engaged the gunman, has remained quiet about the situation. Although many hail him as a hero, he maintains he simply acted in the same manner that any of his fellow firefighters would have.