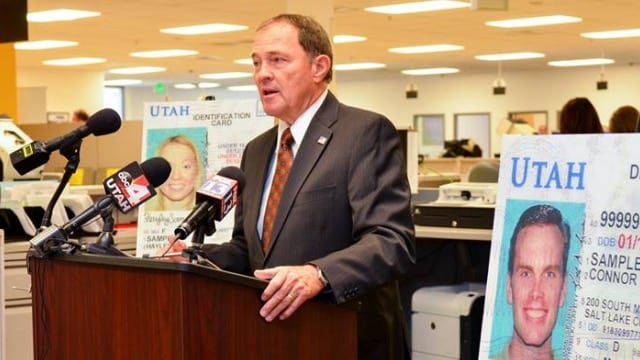 Republican Gov. Gary Herbert vetoed a permitless carry bill in 2013 and threatened to do the same last year, but one state rep wants to give it another try. (Photo: Gov. Gary Herbert’s office)

A state lawmaker aims to introduce a measure that would codify the right to carry a concealed handgun in Utah without a permit.

State Rep. Lee Perry, a Republican whose day job is that of a Utah Highway Patrol lieutenant, told KUTV he is drafting legislation that would keep the current permitting scheme in place while allowing for those legally able to possess a gun to carry one without a license.

“The bad guys are already carrying guns,” Perry said. “You should be allowed to carry open or concealed if you’re a law-abiding citizen.”

This is not the concept’s first brush with Utah lawmakers. Republican Gov. Gary Herbert in 2013 vetoed a popular House measure citing that, “Utah’s permitting system has been in place for decades, and in its current form for more than 15 years. In that time, it has become a national model.”

Last year a constitutional carry bill passed the Senate in a 21 to 6 vote but went on to stagnate and die in the House without making it to the floor.

News of Perry’s plans reverberated with gun control advocates with a national group, the Brady Campaign, posting about it on social media while local activists telling KUTV they were “shocked” that a law enforcement officer would want to eliminate the requirement that those carrying concealed handguns first get a permit.

Utah has issued 662,720 valid concealed carry permits as of the end of June, according to the state’s Bureau of Criminal Identification. This is an increase of 74.3 percent from five years ago.

Hebert, in office since 2009, is running for almost certain reelection against Democratic challenger Mike Weinholtz, and has promised to veto constitutional carry if it reaches his desk again.

This fact, however, did not stop the National Rifle Association from endorsing the incumbent governor this week.

“We are proud to endorse Governor Gary Herbert and Attorney General Sean Reyes for re-election in Utah,” said Chris W. Cox, chairman of the NRA-PVF, in a statement. “The NRA is confident that these two pro-Second Amendment advocates will continue their pro-freedom leadership in Salt Lake City.”

Earlier this month lawmakers in Missouri voted to override Gov. Jay Nixon’s veto on a constitutional carry measure, making that state the 11th in the nation to adopt such a measure. Missouri will join Alaska, Arizona, Arkansas, Idaho, Kansas, Maine, Mississippi, Vermont, West Virginia and Wyoming.