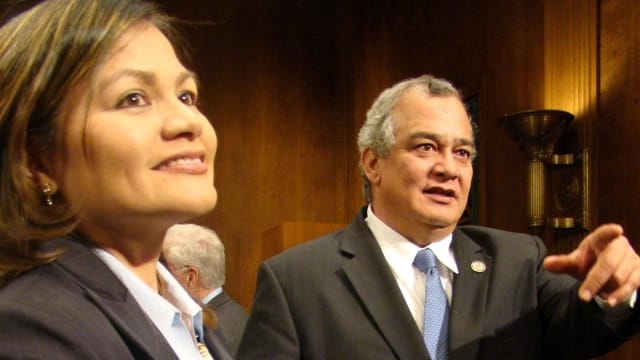 The Honorable Ramona Manglona, left, has been the presiding judge of the District Court for the Northern Mariana Islands since 2011. In the past year, she has repeatedly held the government to task on gun rights. (Photo: Congressman Kililisablan’s Office)

A federal ruling issued this week struck down a handgun registration scheme, a ban on assault weapons and public carry, and a $1,000 excise tax on handguns in the Commonwealth of the Northern Mariana Islands.

The law, dubbed Special Act for Firearms Enforcement, imposed sweeping gun control measures, licensing schemes and strict rules regarding how one carries and secures firearms. But Saipan resident and U.S. Army veteran Paul Murphy challenged the law after he had both a rifle and handgun confiscated by the Department of Public Safety despite acquiring a license to collect firearms.

Next, the court struck down arbitrary rules on what constitutes an “assault weapon.” She clarified that rifle attachments such as pistol grips that protrude beneath the action, thumbhole stocks, folding or telescoping stocks, flare launchers, flash suppressors and forward pistol grips, make guns safer.

“To the extent that the Commonwealth worries about stray bullets striking innocent bystanders, features that make guns more accurate — as it appears most of the grips and the flash suppressor may do — actually serve public safety by making such stray shots less likely,” Manglona said.

Reacting to the government’s ban on public carry, Mangolia was frank. “The Court finds that the Second Amendment secures a right to bear arms for self-defense in public. Because SAFE completely destroys that right, it is unconstitutional regardless of the level of scrutiny applied, and the Court must strike it down,” she said.

On the subject of the $1,000 excise tax on handguns, the court held that the vast majority of pistols and revolvers sold by an online vendor were listed in the $250-$750 price range and that charging such a high tax, in almost all cases more than the value of the item, was punitive and served no legitimate interest. At the Commonwealth’s current minimum wage of $6.05 an hour, it would take an individual more than a month of regular workweeks to raise enough money alone to pay the gun tax.

“The Court agrees with Murphy that the tax places an excessive burden on the exercise of the right of law-abiding citizens to purchase handguns for self-defense without a corresponding important government interest. Accordingly, the law cannot stand,” she said. “The government need not arm the poor, but it cannot impose uncommon burdens on their ability to exercise their fundamental constitutional rights.”

Yet, it was not a total win as Mangolia upheld the Commonwealth’s ban on magazines that hold more than 10 rounds as well as its safe storage requirements and mandate that gun owners should be licensed.

The Commonwealth’s Attorney General Edward Manibusan held the ruling as a victory for the government and, enjoined by the court from enforcing most of the SAFE act, will modify current law to comply with the case, the Marianas Variety reported. “My office will continue to address the outstanding legal issues through legislation,” Manibusan said. Also, his office said, based on the court’s decision, individuals would be able to carry loaded handguns in public as long as they comply with other laws.

Gun rights advocates welcomed the ruling. “We told them that this new law was also unconstitutional. The gun banners lose again. This is what they get for flouting the judge’s ruling in the first place,” said Alan Gottlieb, president of the Second Amendment Foundation, which backed the case, to Guns.com Thursday.

The group also backed Radich v. Guerrero, which resulted in the overturning of the 40-year ban. In 2014, David Radich sued over the commonwealth government’s ban on handguns and refusal to issue permits for long arms after he was denied a Weapons Identification Card, which the territory requires for one to possess a gun.

Last week, Manglona, who also presided over the Radich case, awarded attorney fees of $93,495 and costs of $8,143 to the plaintiffs from the Commonwealth. That works out to about $2 for each resident in the Northern Mariana Islands. Attorney fees and costs have yet to be determined for the even more lengthy Murphy case.