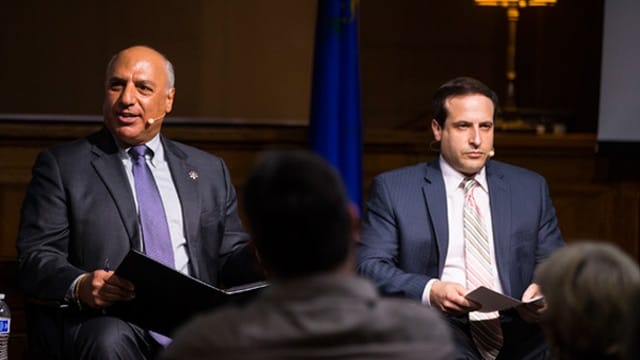 A Nevada professor called research regarding the effectiveness of background checks on preventing gun violence “muddy” and “limited” during a town hall forum at the Las Vegas Mob Museum Thursday.

William Sousa, professor and director of the Center for Crime and Justice Policy at the University of Nevada Las Vegas, presented his findings during the public meeting about the state’s background check voter referendum, Question 1, where he said the data can be used “to support both sides of the argument.”

“I suppose if I was obligated to say … the research leans towards the benefits of it, but there’s a lot of limitations,” he said.

Nevada’s ballot measure, if approved, would extend federal background check requirements to include most private sales and transfers, such as those at gun shows and others arranged through websites like ArmsList. Violators would face a gross misdemeanor charge and a potential penalty of one year in prison and/or a $2,000 fine.

Sousa said researchers tend to study three different aspects of background checks: public support, effectiveness in preventing gun sales to prohibited persons and impact on community violence trends, though he says each of the data sets come with limitations and caveats worth mentioning.

“The American public overall, there is a high degree of support for background checks at gun shows and for private sales,” he said, noting that respondents — no matter party affiliation, race, gender or socioeconomic status — favor the measure in 80 to 85 percent of surveys conducted. “What this would imply is that there is a very high degree of support, but that’s where things get a little complicated. The questions asked on these surveys are very broad. If the question was presented in a different way, people might answer a little differently. They don’t really capture the nuances of all the arguments so while public support is high, these methods are limited.”

Sousa said research regarding whether prohibited persons will be deterred from buying a weapon — and later committing a crime — by a background check also provides some beneficial evidence.

“People who fail them don’t get in as much trouble as people who pass them,” he said. “But here is the caveat, the sample is very limited. It assumes people will go through a background check. The evidence is fairly strong that background checks are effective on the subgroup of people who subject themselves to them.”

It’s the crux of the argument for detractors of Nevada’s Question 1 ballot measure — criminals don’t use background checks when buying guns so expanding the law to include private sales and transfers does not lower violent crime rates.

Anthony, a 29-year veteran of the Las Vegas Metropolitan Police Department, argues two-thirds of the state’s gun owners will ignore the law — either by choice or unawareness — and face a punishment that far outweighs the crime.

“So what are we going to do here? Are we going to round these folks up and arrest them? Are we going to throw them in jail for a year? All of a sudden, you’re creating criminals out of them … for absolutely doing nothing to increase violence with a firearm out there,” he said.

“We’ve heard several times that criminals don’t go through background checks and that’s just not true,” she said, noting the FBI has denied 5,379 gun sales in Nevada to “felons, domestic abusers and other prohibited people” this year alone. “They don’t need to go find some corrupt seller in a dark alley. They can simply go online, meet up somewhere and get a gun because background checks are not required.”

Sousa said, however, current research doesn’t settle the debate one way or another, saying “most studies on this do not establish a causal connection between background checks and community violence.”

“The results are some of the studies show a correlation to lower homicides, but the catch is that most of these studies are really weak by social science standards,” he said. “Correlation does not equal causation. Just because there are fewer gun-related officer deaths in states that close the loophole, that doesn’t mean closing the loophole led to fewer gun-related officer deaths…maybe it’s just a coincidence.”

“So there you go. Probably, possibly and maybe … but it speaks to the point,” he added.

Anthony blamed groups like Nevadans for Background Checks — and its primary benefactor, Former New York City Mayor Michael Bloomberg, and his gun control organization Everytown for Gun Safety — for attempting to erode Second Amendment rights, one law at a time.

Bloomberg has donated close to $4 million in support of Question 1.

“If it wasn’t for the Second Amendment, they would not want anyone to own a gun,” he said. “So what happens is, they come into the community and chip away and suddenly there’s background checks and suddenly you can only have 10 rounds of ammunition … it’s death by a thousand cuts. This is what I see is really going on here.”

Crowe denied she wanted to take away anyone’s guns.

“I believe in the Second Amendment,” she said. “But I also believe with those fundamental rights comes an awesome responsibility to prevent dangerous people from getting guns.”