Amid protests, LAPD chief defends 2 officer-involved shootings over the weekend 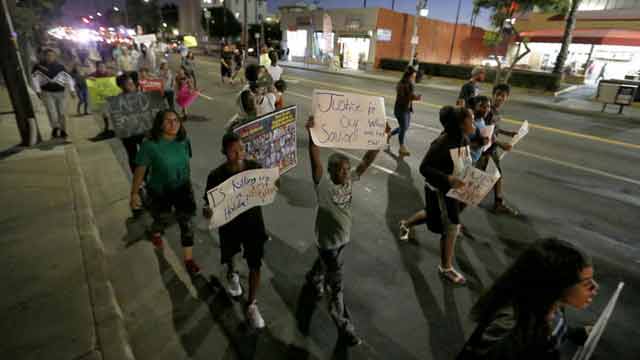 In just over 24 hours, two men were fatally shot by officers from the Los Angeles Police Department, sparking protests within the community, but Chief Charlie Beck defended his officers’ actions in a press conference Monday.

In the first incident, which occurred Saturday, officers attempted to pull over a vehicle with a paper license plate. The temporary plates didn’t match the vehicle’s description, and Beck noted that these type of plates are often used on vehicles which are stolen or used in drive-by shootings.

As officers attempted to pull the car over, they noticed 18-year-old Carnell Snell in the back seat. He looked at the officers, then ducked down, “as if to hide from them.” Soon thereafter, Snell exited the vehicle and led officers on a foot pursuit. As Snell got out of the car, he was holding his waistband, indicating he was armed.

Several hundred yards into the pursuit, Snell, who was on probation for a felony assault charge at the time, turned toward the officers and pulled a handgun from his waistband. The officers, fearing for their safety, reacted by firing a total of six shots, two of which struck Snell in the knee and torso. He was pronounced dead at the scene.

The fully loaded semi-automatic handgun carried by Snell was recovered about five feet from his body. Beck confirmed that there was one round in the chamber, but the weapon had not been fired.

Although the officers involved in the shooting were not equipped with body cameras, surveillance video from a nearby business captured the encounter. Beck said the video clearly showed Snell was armed.

The second shooting happened Sunday while officers were responding to a call about a man with a gun. Authorities said the unidentified Hispanic man was shot after he pointed a gun at the officers, a claim which was backed by body cam footage. Beck also noted that rumors going around that the man was shot while lying on the ground are completely untrue and unfounded and, in fact, the body cam footage shows quite the opposite.

That man was also pronounced dead at the scene, but authorities, thus far, have been unable to identify him. And as it turned out, the weapon he was carrying was a BB gun with the orange safety tip painted black to resemble a real gun.

Beck said both of the shootings occurred in high-crime areas of Los Angeles notorious for violence, particularly gun violence. Beck assured the community the department is doing all they can to get “guns out of the hands of those that would use them against others.”

Still, protesters gathered, showing contempt for the actions of the officers.

“We’re so tired. These kids don’t want to die” said 24-year-old protester Jade Daniels, questioning why a black person would point a gun at a group of police officers.

But Samuel Walker, a retired criminal justice professor at the University of Nebraska-Omaha, said if a person is aiming a gun at a police officer – or anyone else – the normal assumption is that the individual is going to shoot. Likewise, Walker noted that police officers are trained to stop an imminent threat.

“Hitting them in the arm or leg, that only happens in the movies,” he said. “It’s pure Hollywood.”