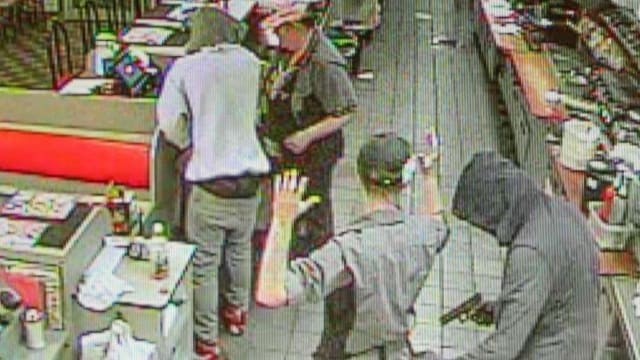 The Coweta County Sheriff’s Office reported one suspect placed a gun in the cook’s back and demanded her wallet, while a server opened the cash register. (Photo: CCSO via The Newnan-Times Herald)

The chain of late-night hash brown and egg joints has long held a “no guns” policy but that hasn’t stopped a Georgia location from being repeatedly robbed at gunpoint.

Headquartered in Norcross, Georgia, the breakfast chain has some 2,100 locations in 25 states, primarily in the South, but robbers have targeted a restaurant in the Newnan area twice in the last month.

As reported by The Newnan-Times Herald, the McCollum-Sharpsburg location in Coweta County was targeted by two armed men around 11:20 p.m. Sunday night. While no customers were in the cafe, Troy Foles with the Coweta County Sheriff’s Office reported one suspect placed a gun in the cook’s back and demanded her wallet, while a server opened the cash register.

It’s not just the Coweta store that has seen violence. Two other Waffle House locations in Fairburn and Jonesboro were robbed on Sunday night, early Monday morning, according to Foles.

The chain in the past has kicked out law enforcement officers and armed National Guardsmen while enforcing their strict “no-guns” policy. This hasn’t stopped defensive gun use by armed concealed carry practitioners in 2015, 2013 and 2012, in each case leaving a would-be robber shot.

While Waffle House did not respond to a request for comment made by Guns.com, Jerry Henry, executive director for GeorgiaCarry.Org, a gun rights group in the state, did.

“One has to wonder if it was the big Waffle House sign the drew the crooks to the location or the little sign on the side of the building that told them it was ‘easy pickings’ – the no firearms allowed sign,” said Henry. “So many businesses can’t seem to grasp that gun free zones are where most crimes occur, so they continue their practice of disarming good guys while the criminals continue to be armed and refuse to obey their signs.”