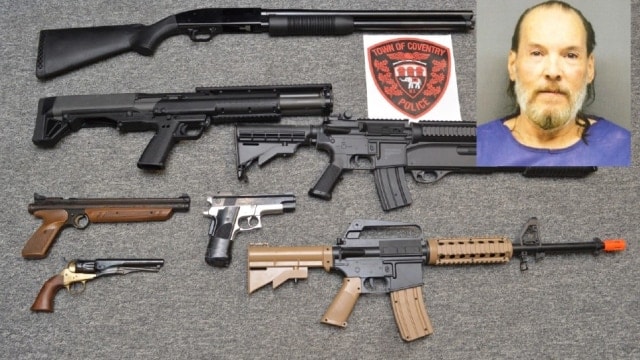 60-year-old Larry LaChance was arrested by police in Rhode Island and a cache of “guns” recovered. (Photo: NBC10)

Police in Coventry, Rhode Island served a search warrant on a man and ended up with a display of guns to show off– some of which may be actual firearms.

As reported by the local NBC affiliate, 60-year-old Larry LaChance was arrested by police after a stand off that included pumping the house with pepper spray. Charges amounted to disorderly conduct, domestic failure to relinquish a phone, and discharge of a firearm in close quarters due to a bullet hole they found in the interior of the home.

Then came the money shot of the seven guns recovered, above. Two of the handguns are Crosman/Daisy BB guns, while the third is a black powder cap and ball replica. The two rifles appear to be air soft guns. Only the shotguns, a pump action Mossberg 500/Maverick 88 security model at the top and a Kel Tec Shotgun (KSG) to the far left, appear to be real.

“We found a shotgun, double-barreled,” Col. John MacDonald of the Coventry Police Department told NBC 10 News about the KSG though confusingly he noted that, “It’s a 12-shot capability and multiple shot without pumping,” even though the shotgun has a single barrel and twin tubular magazines that require the pump action to be manually worked after every shot to cycle.

Authorities are continuing their investigation.